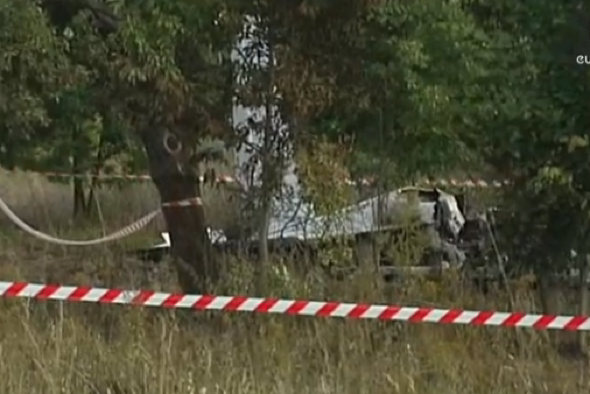 Eleven people have been killed after a plane carrying members from a parachute club crashed and burst into flames in Poland.

Only one of the 12 people on board survived the crash, but suffered serious injuries.

Paweł Frątczak, national spokesman for the firefighters, said that 11 parachutists and a pilot were on board the twin engine aircraft when it took off for a training flight.

Minutes after it had left an airfield in Rudniki, near Czestochowa, it crashed and caught fire in an orchard in the village of Topolow.

It is not clear what exactly caused the crash, but onlookers said the plane's engines had made odd noises before plunging to the ground.

According to the Guardian, Frątczak said that firefighters found two dead, and one injured person was taken to hospital. Paweł Liszaj, the firefighters' local spokesman, said that medical services at the site confirmed there were nine other bodies in the wreckage.

Speaking to the BBC, police spokeswoman Joanna Lazar said local people had been involved in rescuing the sole survivor, saying: "We have established that just after the crash local residents came running towards the wreckage and helped to save one of the passengers from the plane. A 40-year-old man was taken to hospital."

One witness, retired police officer Robert Koziol, told the BBC that it appeared some of the passengers had tried to jump from the plane, saying: "There were open parachutes lying on the ground.

"The worst thing was that one person tried to get out of it (the plane) but slid back inside. We tried to help them, but there was nothing we could do. Everything was on fire, even the ground."

According to the Mirror, the plane was the property of a private parachuting school based at the Rudniki airport.