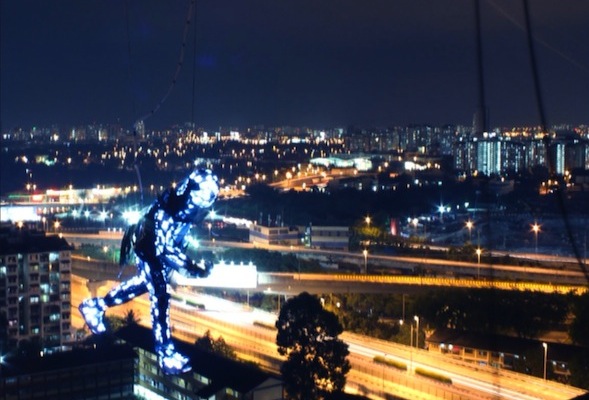 Residents of Kuala Lumpur have been treated to an awe-inspiring 'Strobe' light show, which was brought to the Malaysian capital by Japanese carmaker Lexus.
Titled 'Amazing in Motion', the display saw the city dotted with stationary acrobats wearing lighting technology to create the effect of a fast and daring aerial display.

These 'lightmen', wearing custom-made LED suits where placed on top of some of the tallest buildings of the Kuala Lumpur skyline. The suits were linked to a computer system controlling each individual LED's strobe pattern; making for breath-taking illumination across the cityscape.

Video: Lexus' strobe-light extravaganza
Up Next


The suits themselves were designed by Vin Burnham, an international, award winning Hollywood costumier, whose previous credits include the 'Batsuit' for Batman, and 'The Living Dress' for Lady Gaga.

The Strobe show is the brainchild of Adam Berg who's no stranger to high-profile events, having done similar work for the likes of Ikea, Samsung, Jordan and Dulux.

Click play below to watch the light show in action.