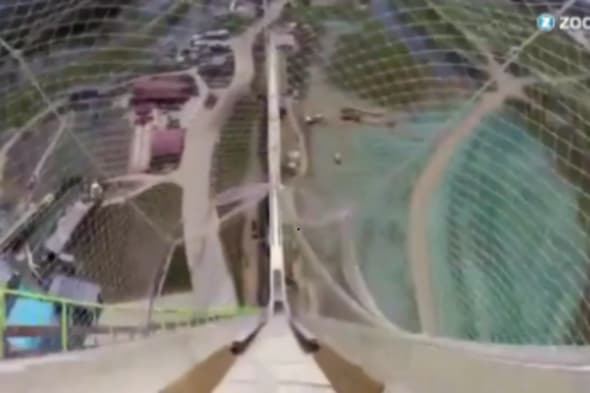 The world's tallest water slide, due to open later this month, is 17 storeys tall - that's higher than Niagra Falls!

Creators of the Verruckt (which is the German word for "insane") at the Schlitterbahn water park in Kansas have sent a camera down the terrifying slide ahead of the official opening to show daredevil riders what they are in for.

The video shows stomach-churning footage of the near-vertical drop which, according to the Telegraph, is the main feature of the record-breaking slide.

The slide is almost at a right-angle to the ground and thrill-seekers must climb 264 steps to the top.

Riders are then strapped to a four-person raft before they plunge down the slide at around 100 kilometres per hour.

The newest ride at the Kansas City theme park has been officially verified by Guinness World Records as the tallest waterslide in the world.

Before the Verruckt, the record holder for tallest water slide was the 134.5ft Insano slide in Fortaleza, Brazil.

The Daily Mail reports that launch of the ride has been delayed a number of times due to problems with the conveyor system that transports the rafts punters lay on to the top of the slide.

Would you dare to go on this? Tell us below!