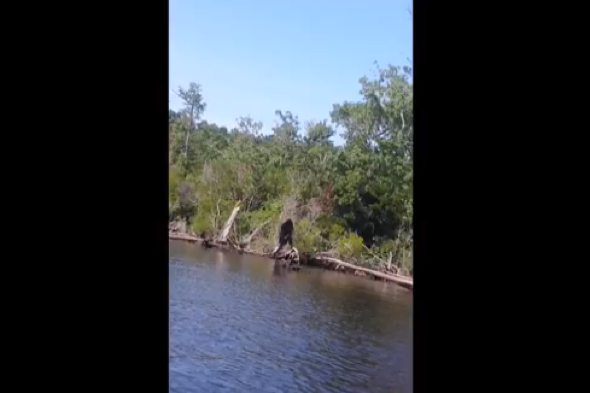 Three men say they have caught footage of Bigfoot while fishing in Virginia.

Randy O'Neal, his father and his uncle were all angling on the Intercoastal waterways when they spotted what they believe to be a sasquatch on the opposite shore.

Ryan uploaded the pictures and a back story in a video on YouTube, and defies users to prove it's fake, writing: "Feel free to pause, copy, zoom, dissect, or whatever you need to do to prove this is fake."

He explains how he saw a creature in the same area 25 years ago, which he shot at.

In response to claims that story is false, he wrote on YouTube: "For the record. My story from 25 years ago is true. The photos are real and not photoshopped. #1 I am not willing to pay the price for the Adobe Gold Plated Software lol. Who am I? I am a husband and father of three. Our kids are grown and now we train and ride horses as a hobby. As a profession, I am a Microsoft Certified Instructor. I have better things to do with my life than create a hoax for anyone's pleasure."

This story is just that latest in a string of 'Bigfoot' sightings.

In April, two men claimed they had found the Australian Bigfoot in South Queensland.

They uploaded a video of the 'Yowie' on YouTube and wrote: "We believe its a young Yowie In the early morning on saturday 29/03/2014.

And, in January, a researcher and Bigfoot expert claimed he had found the home of the legendary creature in the wild woods of Arizona.

The Daily Mail reports that Mitch Waite and his wife Susan Farnsworth filmed the lair buried half under the ground with a narrow entrance in the Tonto National Forest.

The nest was discovered in 2010 and features on Animal Planet's 'Finding Bigfoot' series, but there is little evidence that the giant ape lives in the hole.

Do you believe that Bigfoot exists? And you think this is the real deal? Leave your thoughts below.

More strange stories (that actually turned out to be relatively normal):

'Bigfoot' spotted for second time at fishing hotspot (video)
This UFO-shaped cloud caused a stir in China when it was spotted hovering in the sky above Jilin Province. The 'lenticular cloud' was pictured moving fast near the Changbai Mountain at the boundary of China and North Korea. After two minutes it was absorbed into a huge cloud cluster and disappeared.

Yes, you read that right. In 2011, a man called 999 to report an unidentified flying object above his house in Hertfordshire. He sounded genuinely panicked and told call handlers blazing lights were coming towards him. Two minutes later the man called back when he realised what he saw was the Moon!

A Swedish diving team found a strange object with "rounded sides and rugged edges" at the bottom of the Baltic Sea in 2011. Some believed that a UFO had crashed into the sea, while others speculated it could be the remains of a World War II German anti-submarine device. Most experts concluded it was most a natural geological formation rather than an "anomalous" object.
This picture shows what looks like the incredible moment a 'UFO' hovered over Seattle. It was in fact the unusual cloud formations around the iconic Space Needle appearing to reveal an alien ship in the sky above the city. But thanks to the building's saucer-like shape it made for a convincing UFO snap.
A rare occurence in 2008 saw Venus, Jupiter and a crescent moon appear together in the night sky from Portsmouth. While planets have been mistaken for UFOs, experts say the sighting was a 'conjunction'. Robert Massey of the Royal Astronomical Society told the Daily Telegraph that "they just appear close in the sky". He added: "I wouldn't be surprised at all if the... police and the [Ministry of Defense] and the [Royal Air Force] get calls about UFO sightings. Because it's a spectacular sight and quite unusual and I think for that reason people really will be struck by it."
Weather balloons are often mistaken for unidentified objects but when they explode they can really look like something that occurs deep in space. When a man from California was scanning the night sky and saw a sudden burst of light through his telescope he was convinced he'd seen a UFO. "I saw another object orbiting this - whatever it was up there, and I’ve never seen anything like that before," Elijah Prychodzko told CBS13. He sent it to a scientist who concluded it was a weather balloon exploding. It was explained as decreasing air pressure causing the rising balloon to expand until it bursts.
Light bouncing off our camera lenses can cause a flare that shows an otherworldly object in our photos and if well placed they can look like alien spacecrafts, like this lens flare that could be a spaceship following a car.
A series of bizarre lights were spotted shining in the sky over Cincinnati in 2012. They were compared to the 1997 Phoenix Lights and after various sightings it was soon revealed that they were not space invaders, but just a group of five skydivers wearing illuminated clothing and performing a pyrotechnics show at a high school event.
These unmanned objects are often deliberately created to look like UFOs to fool people, such as when pizza company Domino's' launched the remote-controlled 'Domicopter'. With more drones in the sky, there have been more UFO reports too. A flying object over a Canadian baseball game in 2013 turned out to be part of a marketing campaign from the H.R. MacMillan Space Center and a camera-mounted drone observing a large crowd of protestors in Moscow was identified as police surveillance. Military drones have also been mistaken for mysterious flying machines - residents in Washington D.C. once thought they had seen UFOs travelling along the Capital Beltway.
One of the most mysterious natural phenomena is ball lightning, which is seen as a flash during a storm and is difficult to capture on camera. Scientists have said ball lightning explains many UFO sightings, like when a green object was seen to roll over the mountains over Brisbane, Australia. Astrophysicist Stephen Hughes told the BBC: "If you put together inexplicable atmospheric phenomena, maybe of an electrical nature, with human psychology and the desire to see something - that could explain a lot of these UFO sightings."
Up Next

Is there a demonic Bigfoot running around Tunbridge Wells?