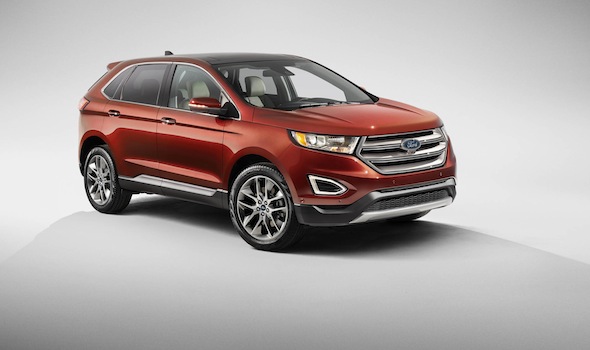 The Blue Oval has been relatively late to the SUV game in the UK, only recently releasing its Kuga and EcoSport models to a lukewarm reception from motoring journalists and customers alike.
Ford hopes to change all that with its flagship Edge SUV, a larger, smarter and more technologically advanced offering that has been winning over fans in North America since its release in that region almost seven years ago.

On top of refreshed exterior design, which has been given a complete overhaul to make it appear more athletic and chiselled, the introduction of new interior technology will attempt to make life with the big 'off-roader' easier.

Adaptive Steering optimises steering response with accordance to vehicle speed, Ford's Active Noise Cancellation system employs interior microphones to 'cancel out' road and tyre noise via the sound system and Front Split View Camera technology makes negotiating difficult junctions or parking spaces with restricted visibility easier through the use of a 180-degree camera system installed in the nose of the vehicle.

Ford reveals new Edge SUV for Europe
Up Next


Perhaps more important for the family-orientated customers likely to invest in new Edge is the long list of safety advancements that now feature. Inflatable rear seatbelts act like an extra airbag during collisions, inflating in nanoseconds to reduce chest and neck injuries, specifically in children. Active City Stop aids low-speed driving around town by employing radar technology that electronically applies the brakes should traffic suddenly stop up ahead, while the Blind Spot Information System and Lane Keeping Aid aim to make motorway driving safer and more comfortable.

An improved Intelligent All Wheel Drive system with torque vectoring is also said to improve both on and off-road handling abilities.

The new Ford Edge will be on sale across Europe next year, starting at around £30,000.
Tags
Read Full Story Click here to comment