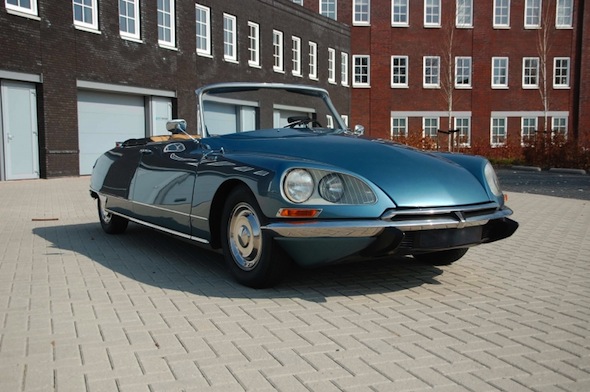 Rewind to 1968 and the stunning Citroen DS 21 was rolling off production lines. It featured a powerful (for the time) 139bhp, 2.2-litre petrol engine with an innovative four-speed semi-automatic transmission and knee-trembling styling.
There was arguably very little as stylish and as comfortable on long, cross continental cruises as the DS 21 and this convertible version is just one of 95 models that were originally manufactured.

Other neat features include Citroen's self-levelling suspension, a stylish single-prong steering wheel and an in-built Continental radio that looks as if it should take centre stage in an art gallery.

The car offered here was imported from Canada to Holland in 1993. It underwent a serious restoriation project between 2008 and 2010, receiving nothing less than an overhauled interior, new chrome work, fresh electrical wiring and some 500 man hours invested into the beautiful Arctic Blue bodywork.

Very Superior Old Cars, the firm managing the sale, says the car also drives like a dream thanks to a complete renovation of the oily bits underneath the bonnet.

"For swift motoring across long distances in total comfort, the enthusiast simply cannot do better than a chic and avant-garde Chapron Decapotable. This must be one of the nicest examples available," reads the accompanying advert.

The €155,000 price tag may seem a little steep but this is one machine that is destined to rocket in price.

Are you feeling brave? Check out the listing here