A tour around the campsites of Le Mans 2014 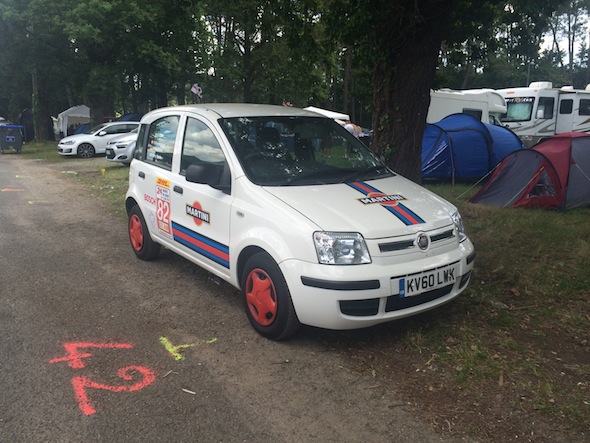 If you haven't camped at Le Mans, you're missing a truly unique event. Yes, there is an amazing race going on for 24 hours but the real competition is in the campsite and it begins almost a week before the racing.
Every attendee has something to prove and anyone who has taken on the challenge knows there are three eligible categories: car presentation, pitch presentation and, most importantly, the burnout.

Here is a selection of cars, which entered the unofficial competition in the leafy areas surrounding the Circuit de la Sarthe, which impressed us most this weekend.

Click through the gallery to take a virtual tour...

A tour around the campsites of Le Mans 2014

So, you're heading to Le Mans and you want to make your daily drive stand out, what can you do? Take some inspiration from your favourite racing cars, that’s what. No, this isn't a Peugeot 205 GTI rally car or Williams F1's latest creation, it is actually a Fiat Panda - but you'd be forgiven for mistaking the two.

Some campers aren't interested in the road trip aspect of Le Mans, they're all about showing off their wheels when they get there. These guys towed their beach buggy to the event so it would take pride of place next to their massive gazebo.

The owner of this ace motor claimed it had previously won its class at Le Mans. Apparently, he bought it from his builder friend and had it converted into a road car. It spent most of its time under a cover before coming out for a rare moment to do donuts and burnouts in the campsite. The VW Golf and motorhome support complete the five star camping experience.

These guys are Le Mans regulars - a crew of lads who jump in their decorated cars each year to make the trek to France. The police car - or any other emergency service for that matter – is a favoured livery for the 24-hour race. So much so, when an ambulance arrived at this weekend, I couldn’t tell if it was real or not. It was real.

On the bright side, this Lexus will be up for sale on eBay this week! I offered them the €5 I had left, but they weren't interested...

If you have a beautiful classic like this E-type Jag, you won't look out of place at Le Mans. Some historic beauties make the journey completely unscathed, others (we’re looking at you TVR) don’t. This Jag made it look effortless.

The brave AC owner decided to risk the rain and the drunks to camp in a field in France. The Cobra took pride of place next to its custodian’s tent all weekend, lapping up the glory as the only AC in this campsite and enjoying a lot of attention from passers-by.

Would you believe this is a motorhome? The owner, Mike, lugs this masterpiece from festival to car show all summer and it just fits in, apparently! Made up of lanterns, statues, cushions, rugs and candles, it is a real work of art. If you’re not camping like this, you’re definitely not trying hard enough.

TVRs are those cars that you rarely see day-to-day but you can’t get away from at Le Mans. A lot of them are on the side of the road with their bonnets up but many make it to the campsite and look fantastic, like this pair.

Electric cars are great, don’t get me wrong, but they aren’t really designed to brave the elements at a campsite outside a race circuit. This guy thought he’d look cool but ended up having to charge his Tesla next to the toilet block. Not a good call.

Bentleys are associated with class and luxury. The last place you’d expect to see one is in a field under a tree. An even more unlikely scenario is the owner sleeping in a tent next to it.

Mini-motos, monkey bikes, Segways and scooters rule the campsite once the cars and busses are parked. They’re used for the important job of getting to the toilets or beer tent. This moped gets ten-points for creativity though, as it's owners had covered it in leopard-print fur.