Giant jellyfish wash up on beach in Dorset 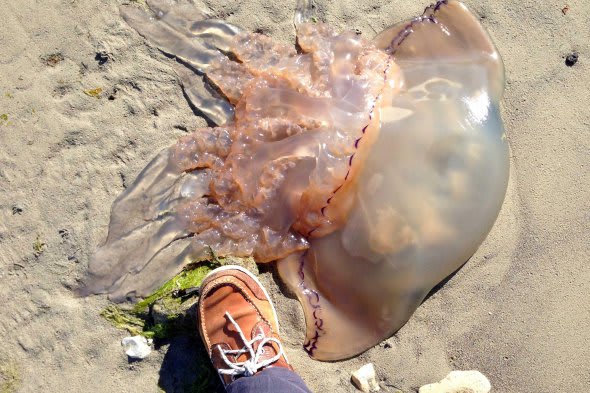 Giant jellyfish have been washing up on Dorset beaches thanks to the spring tides and windy weather.

A number of barrel jellyfish have been spotted in the sea and washed up on beaches along the Dorset coast, reports the Dorset Echo.

The barrel jellyfish is relatively rare in coastal areas and can be as long as one metre, according to the Bournemouth Echo.

The Marine Conservation Society are warning that the larger than life marine animals could become a regular sighting if the hot weather continues, reports ITV.

Steve Trewhella, a professional wildlife photographer and environmental campaigner, has been tracking the creatures.

"They are not at all dangerous to people, but it is best not to touch any jellyfish unless you are sure what it is," he said.

"They are heavy creatures and they get washed in to shore, and when the tide goes out they can't escape and end up beached. Barrel jellyfish are a favourite food of the leatherback turtle so we might see some of those here too.

Mr Trewhella encourages people to take pictures of the creatures and report their sightings to conservation groups such as the Marine Conservation Society.

Richard Harrington from the Marine Conservation Society said: "We are very keen to hear from people that find any washed up anywhere around the country."

Giant jellyfish wash up on beach in Dorset
Up Next

Jellyfish are taking over our oceans, say experts