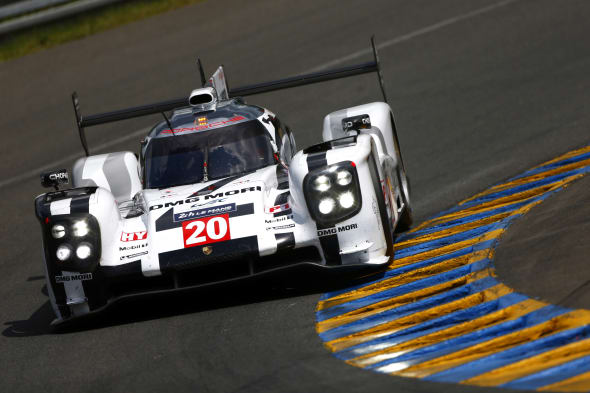 Toyota controlled nearly all of the opening three hours of the Le Mans 24 Hours but it was the weather that dominated the race and was making the headlines.

The #20 Porsche 919 Hybrid of Timo Bernhard led Stephane Sarrazin in the #7 Toyota TS040 Hybrid and Benoit Treluyer in the Audi R18 e-tron quattro as the race reached one-eighth distance but it was under another full course safety car period following two spells of torrential downpours that caused chaos through the field.Alexander Wurz had started the race in the #8 car and immediately opened a gap behind him as Nicolas Lapierre in the sister Toyota made easy work of Neel Jani in the second-placed Porsche. He then found himself in an almighty battle with the first two Audis of Andre Lotterer and Marco Bonanomi who both managed to get past the Frenchman.

Jani, who had dropped to sixth, was forced to pit after 10 laps with a fuel problem, losing 10 minutes as the problem was fixed.

The biggest casualty of the opening laps was the experimental Nissan ZEOD RC which retired with gearbox failure after just five laps.

Driver Wolfgang Reip reported the problem as he entered the high speed Indianapolis and by the time he reached Arnage Corner he had slowed dramatically. With marshals help, he was able to get the car back to the pits but it was quickly realised the problem was terminal.

The end of the ZEOD's race came just hours after it had made history in the morning warm-up by becoming the first car to drive a complete circuit of the 8.5-mile Le Mans track powered by electricity only. Reip had been at the wheel then as well as the car completed the lap powered by a pair of 110 kW electric motors rotating at 40,000rpm.

The first downpour came at 1630 CET and led to the second high profile retirement. The #3 Audi driven by Bonanomi was in a group of cars that had slowed because of the wet track. Lapierre came upon the group at speed and hit the barrier and then the Audi. The then-leader of the GTE AM class, Sam Bird, in the #81 AF Corse Ferrari 458 Italia also hit the R18.

Bird was out and Lapierre tried to get the car moving again but was forced to retire while Lapierre limped back to the pits where the mechanics eventually fixed the problem and got the car back racing. He would be back in again for more work and when he got back on track near the end of the third hour he was eight laps down.

Later Lapierre claimed he did not if he hit the GT car or vice versa.

"I came on to the back straight before the Michelin chicane," the Frenchman said. "There was very heavy rain and then I saw some cars very slow, none had a rain light on. They were very slow and I tried to brake.

"I'm not sure if the GT car hit me first or not. I don't know really what happened. Then I went against the wall on the right side and a GT car took everyone out. That's all I can remember from the crash. Honestly there was nothing I could see and nothing I could do."

The accidents promoted Bernhard's Porsche 919 Hybrid into third but he would soon take the lead as a second even heavier downpour came.

The race had resumed at 1715 with the #7 Toyota of Wurz leading Lotterer in the #2 Audi and then Bernhard but within 15 minutes the rain struck. The safety car came out again for 20 minutes and in that time, Wurz and Lotterer both pitted.

Bernhard was ahead and Porsche was leading Le Mans for the first time after a 16-year absence.
Tags
Read Full Story