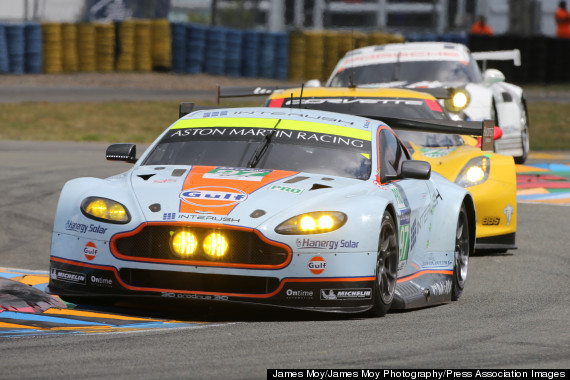 Aston Martin led the GTE Pro and Am classes as Le Mans reached the eight-hour mark but both classes looked as though they would be going right to the wire.

As the clock moved towards 2300 CET, Darren Turner in the #97 Vantage GTE was less than half a second behind the leading Chevrolet Corvette C7.R of fellow Briton Richard Westbrook on lap 71 before passing him on the Mulsanne Straight. He was still leading GTE Pro as the eight-hour mark came whilst Giancarlo Fisichella had moved up to second in the #51 AF Corse Ferrari 458 Italia.Turner had taken over from former F1 driver Bruno Senna whose three-hour stint had put the Vantage into second.

After watching his team-mate take the lead, Senna said: "The car was working well so we could push hard. Darren has done a fantastic job to get into the lead and pull away so much. There's a long way to go.. but we'll keep pushing."

In GTE Am, the class for professional and amateur drivers, the top two spots were both held by Aston Martin Vantage GTEs, led by the #98 car of Paul dalla Lana with Nicki Thim second in the #95 sister car.

The #98 car pulled away from the rest of the class to take a one-minute 20-second lead. Christoffer Nygaard had driven a triple stint on the same tyres before handing over to dalla Lana, who continued to build the lead while David Heinemeier Hansson in the #95 Young Driver AMR Vantage GTE also ran three stints before Thiim took over and began to close the gap on the leader.

"The changing weather in the first few hours of the race meant we were not quite where we wanted to be, going into the second quarter," Aston Martin Team Principal John Gaw commented. "However, the drivers have all done a tremendous job to take the lead and pull away.

"We are now where we wanted to be at this stage in the race, but there is a long way to go and we must stay focused as we race in the darkness."

Aston Martin Racing, which is marking its 10th consecutive Le Mans, is no stranger to success at Le Mans having taken GT1 honours in 2007 and 2008 after huge battles with Ferrari and most notable, Corvette.
Tags
Read Full Story