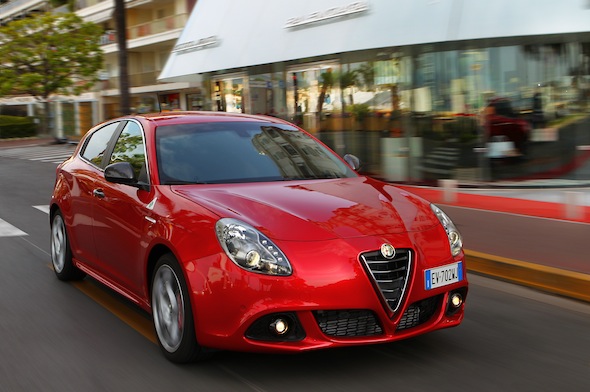 Utter the letters 'AMG' or the words M-division to anyone in the street and it's highly likely they will have some vague notion that you are talking about high-performance cars... or they will pass you off as insane.
Take a cruise to your local Halfords car park and press a few hot hatch fanatics about the pros and cons of owning a 'RenaultSport' or driving an 'ST' and they will know exactly what you are on about... or they'll tell you to "move on, grandad".

Either way, Alfa Romeo's 'Quadrifoglio Verde' badge – or Cloverleaf to you and me – doesn't quite have the same resonance with the regular chap on the street. Despite gracing high-performance models since the 1960s, it is still only coveted by those in the know or those who harbour a deep passion for the Italian marque.

Now, Alfa has made one of the boldest moves yet to prove that the little leafy badge really does signify high performance by dumping the engine and drivetrain from the 4C into its Giulietta model.

But is it any good? AOL Cars flew to Alfa's testing ground in Balocco, Italy, to find out...

The spiciest "meat-a-ball" (sorry, we couldn't resist) in the Italian marque's line-up of hatchbacks. Boasting an impressive 236bhp thanks to the engine and drivetrain from the almighty 4C, the Giulietta Quadrifoglio Verde (QV) certainly means business. Despite its performance intentions, it remains an altogether classy proposition, with a selection of sleek cabin materials and subtle exterior styling tweaks marking it out from the bustling hatchback crowd.

The same direct injection 1750 turbo petrol aluminium block unit that's found in the 4C. And it develops the same horsepower output too. But because the Giulietta QV still has to serve as a stylish Italian cruiser and weekly shopping mule, it doesn't quite boast the same impressive performance figures as its overtly sporting sister. The 0-62mph dash is despatched in six seconds, while 80 per cent of the 340Nm maximum torque is available from as low as 1800rpm. Clever engine fettling sees around 40mpg returned on the combined cycle and CO2 emissions reduced to a Euro 6-friendly 162g/km.

This is a range-topping Alfa so expect a full list of added niceties as standard (even if some of them fall off in your hand a few months down the line), which include: figure-hugging leather and alcantara sports seats, a bespoke instrument cluster with mini 'Quadrifoglio Verde' emblem, a flat-bottomed steering wheel and a number of sporty exterior styling highlights (sideskirts, Brembo brake calipers, glossy mirror caps). The infotainment element consists of the typical Alfa 6.5-inch Uconnect multimedia system that's both clunky to use and slightly cheap-looking.

Anyone with around £30,000 in the bank is spoilt for choice when it comes to purchasing a competent, stylish and ludicrously quick hot hatch these days. Fancy a blisteringly fast Golf that is built with typical German precision and boasts an extra 60bhp? Buy a Golf R. Or, alternatively, save a few quid and test-drive the brilliant Seat Leon Cupra 280. £28,120 is a lot to ask for the 'standard' Giulietta QV and £30,280 for the limited Launch Edition is just plain crazy considering the competition it faces, but there's no denying it's a pretty thing.

It's quick but despite Alfa's constant reminder that it shares underpinnings with the 4C, it doesn't offer the same level of driver interaction. Regardless, steering is direct when the DNA driving mode selector toggle is flipped to 'Dynamic' and throttle response is sharp. Alfa has pitched the ride somewhere between the 4C's 'spine-shatteringly hard' and the MiTo's 'marshmallow soft' set-up, which will please motorway cruisers but not those looking to reduce lap times. Niggles include the gearbox that, when in full auto setting, tries to instantly kick you up to the highest and most economical gear possible, even in 'Dynamic' mode. To get the most from it, the driver has to switch the box into automated manual mode and wrestle with the cogs via the steering wheel-mounted paddles (no manual available, unfortunately). An engine note actuator has also been employed for the first time, meaning that luscious, rich Alfa exhaust note is piped directly into the cabin. It's just a shame it's synthesised and passers-by aren't treated to the same levels of aural enjoyment.

The Alfa Romeo Giulietta Quadrifoglio Verde certainly looks as exotic as its nameplate would make out but it's difficult to see it stealing sales from quicker, more fundamentally sound hot hatches currently available. Its premium approach to both exterior styling and interior ambience will certainly attract those wanting to shy away from the 'hooligan' image of, say, a Ford Focus ST or Renault Megane RS, but the £30k-tickling price tag puts it in the ring with some very heavy hitters. If bagging a pretty Italian is your only agenda, you won't be disappointed, but if you're after an extremely fast, incredibly capable and truly robust hot hatch, book a date with a German.