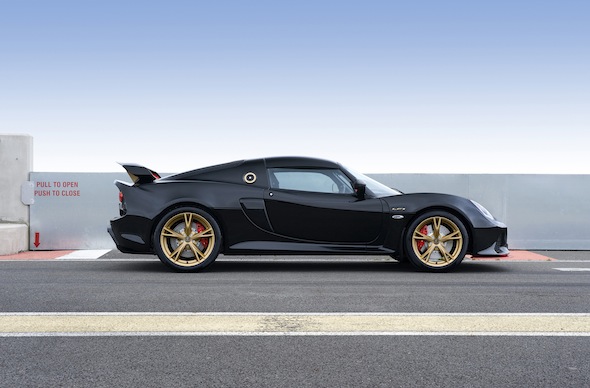 Lotus has unveiled a limited-run special edition of its Exige sports car; built to celebrate its rich Formula One heritage.
Only 81 examples of the new model will be produced, each bearing a plaque denoting a specific race win, from the Monaco Grand Prix in 1960 to Kimmi Raikkonen's domination of the Australian fixture in 2013.

LF1 editions are all finished in the F1 team's gold and black livery, with red accents providing some contrast along the roof, bonnet and the front splitter. Gold wheels – measuring 17-inches at the front, 18-inches at the rear – complete the look.

The supercharged 3.5-litre V6 found behind the rear seats is unchanged from the standard Exige S, though with 345bhp and 400Nm of torque on tap, it's certainly more than quick enough; capable of catapulting the featherweight 1,176kg LF1 from 0-62mph in four seconds flat and on to a top speed of 170mph.

That's not to say Lotus hasn't garnished the LF1 with any go-faster kit whatsoever. Coming as standard is the 'Exige Race Pack' with 'Dynamic Performance Management System' – the latter of which is an advanced traction control system that makes the car easier to exploit on track. Coupled to this are high-performance two-piece brake discs and sticky Pirelli P-Zero Trofeo tyres.

Customers not looking to spend every waking moment driving the car within an inch of its life will be glad to hear an optional comfort pack is also available, which sees the LF1 endowed with heated seats and rear parking sensors for £300.

Owners will also benefit from perks such as exclusive tours, discounts on events and memorabilia including a 1:2 scale replica of current driver Roman Grosjean's racing helmet.