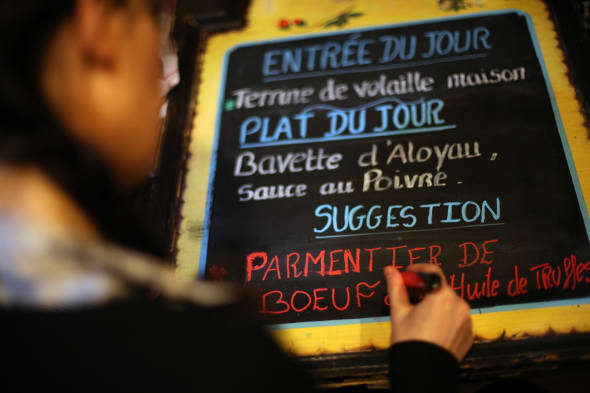 21m Britons are estimated to have some form of food allergy. But should they welcome new EU rules that could change the way food is sold in the UK? The EU wants every single food outlet to list up to 14 potential health risk allergens, from milk to gluten and sesame.

But the new rules could unleash its own red-tape nightmare menu for UK food operators - starting this year. %VIRTUAL-SkimlinksPromo%

Though the new rules might be digested easily enough by the larger chains, for the caff on the corner and tens of thousands of small, independent operators, the well-intentioned EU rules may kill off large servings of spontaneity and innovation - not to mention daily menu changes.

"Fine for formula restaurant chains," Prue Leith told the Mail, "which never change their menus and have bureaucrats to work out how any milligrams of anything a dish has, but for proper cooks - a nightmare."

The new Brussels rules, also, look unlikely to safeguard those with allergic reactions from basic human error. Last year 12-year-old Connor Donaldson died at the Royal Bolton Hospital following an acute asthma attack brought on by a reaction to peanuts from a Bolton takeaway.

His mother, Sarah, had been assured by restaurant staff that her son's Prawn Balti did not contain peanuts. However the inquest heard that the pre-made Balti sauce used may have contained peanut traces after all.

In other words, while new rules means restaurants have an obligation to tell people about allergens before asking, mistakes will still happen. Some restaurants still have a poor knowledge of allergies, cross-contamination and consequent immune system responses.

The other route for some restaurants is they could install a blanket there may be allergens in our food approach across their offering, potentially losing business and putting off some unnecessarily.

Blanket approaches have been used by some food operators like Tesco. Earlier this year Tesco added warnings to some products - apple and orange juice, baked beans - that had previously been considered safe for potential sufferers.

However, some food labelling in shops will be improved (see below ingredients list at the bottom of this article) whereby listing certain types of ingredients will need to be highlighted or underlined from December (though bear in mind that some products have a long shelf life and both types of labelling could be used for some time after the December threshold). 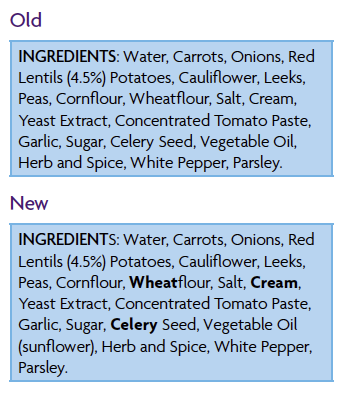