Texting behind the wheel worse than drink-driving 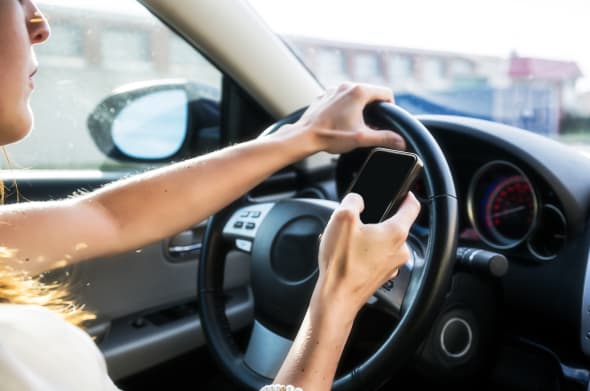 Road safety campaigners are calling for drivers who use their mobile phones at the wheel to be banned from driving for a year.
The pleas come as new research shows the use of a mobile can slow a driver's response times more than being under the influence of drink or drugs.

The results of a study, conducted by the Transport Research Laboratory, showed that sending a text message slowed a driver's reaction times by 37 per cent. The figure is higher than the delays caused by having smoked cannabis (21 per cent) and drinking within the legal alcohol limit (13 per cent).

Meanwhile, talking to someone on a hand-held telephone delays reactions by a significant 46 per cent, the research found.

The penalty for using a mobile while driving is currently a fine of £100 and three penalty points.

Smartphones are now owned by almost three quarters of all adults – and figures from the Department of Transport show that 378 accidents involving such a device – the highest annual figure ever – were reported in 2012.

Those crashes led to 548 injuries and 17 fatalities but worryingly, there has been a reduction in the number of motorists convicted.

Edmund King, president of the AA, told the Sunday Times: "It hasn't been a priority. We need to send out a warning to drivers that the police will have a dedicated crackdown. They need to pull over every single driver seen with a phone," reported the Daily Mail.

Among those backing calls for the drink-driving penalty to be applied to mobile phone use – an automatic 12-month ban and a hefty fine – is the Alliance of British Drivers.

And road safety minister Robert Goodwill said he was considering approaching the Ministry of Justice to press for the introduction of tougher penalties.

Do you think mobile phone users should be treated in the same way as drink-drivers? Have your say below.
Tags
Read Full Story Click here to comment