Drag racer breaks back, walks it off 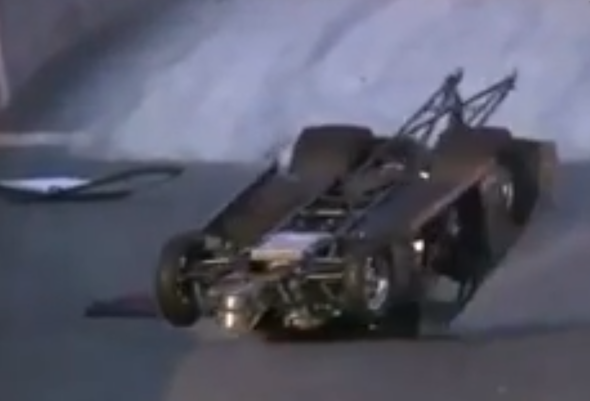 Footage has emerged from a drag race meet in Queensland, Australia, showing a young competitor lose control of his sleek Nissan racer, slamming it into a wall at high speeds.
Ben Bray was competing with his father Victor at the Winternationals event when things went awry. An issue with the car's aerodynamics saw it generate lift, which pitched the supercharged drag special onto its side and in the direction of the concrete barriers lining the course.

Despite being involved in a severe impact, the car continues to slide down the run on its roof with its fitted parachutes flailing about uselessly. Thankfully for Ben, the car's strong roll cage prevented him from being crushed.

Ben walked away from the crash with what he thought was just some minor bruising and urged his dad to jump into his car for his own run down the drag strip.

"It wasn't easy... Ben told me to go. It was nerve wracking getting in the car. I kept thinking about what I had just seen," Victor told Daily Mail Australia.

You can view footage of Ben's high-speed crash below.