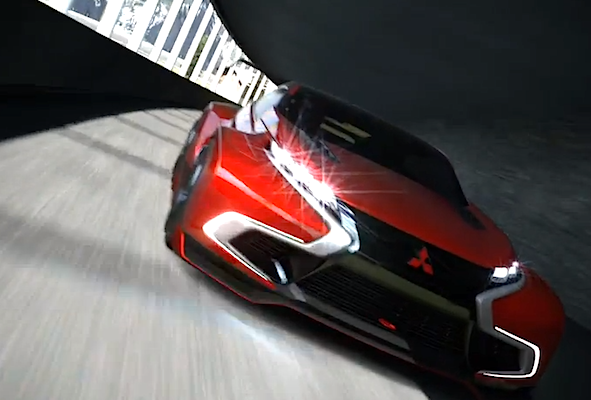 The buzz surrounding Mitsubishi's PHEV Outlander is palpable – adverts can be seen before most documentaries on Channel 4, billboards have been erected up and down the country and dealers have shiny new models sitting proudly in showrooms.
But amidst the hype around the new plug-in hybrid 4x4, the Japanese marque has also unveiled a much sportier eco-vehicle that will only ever exist in a virtual world.

Dubbed the Mitsubishi Concept XR-PHEV Evolution Gran Turismo (phew!), this four-wheel drive speed machine is loosely based on a similar concept that was shown at the 2013 Tokyo motor show but features updated styling and a number of performance tweaks.

The vehicle will be available to test drive in the virtual world of Gran Turismo 6 and it will be powered by a tuned Plug-In Hybrid EV system that will turn all four wheels via an eight-speed dual clutch transmission.

Mitsubishi has employed some of its previous rallying experience by adding an advanced S-AWC all-wheel-drive vehicle dynamics control system that is designed to distribute optimum output through each tyre.

A lightweight carbonfibre shell and abundance of aerodynamic bodywork will ensure impressive in-game performance and handling. It's just a shame we'll probably never see one on a road any time soon.

Gran Turismo 6 owners will be able to download the car for free by completing a lap of the new Seasonal Event or it can be purchased in the game's 'Cars' section.