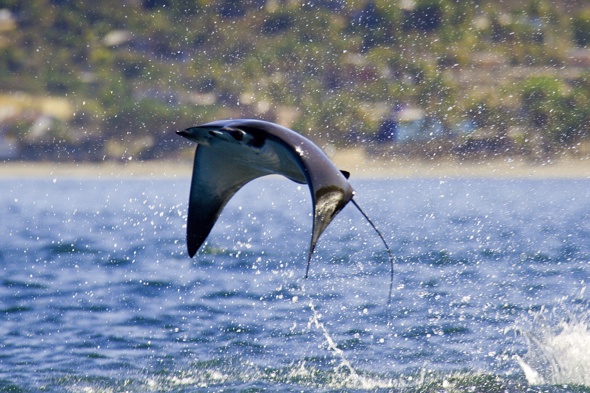 Pictured soaring high above the water, you might think these winged wonders are a rare type of bird but they are actually flying mobula rays.

Seen bursting out of the water with their wings outstretched, the incredible series of pictures manages to capture the sprightly sea creatures mid-flight.

Once airborne, the rays then flap their impressive fins, in what looks like an attempt to fly.

Spotted along the Eastern Shore of Baja, Mexico, huge schools of the sea devils can appear without warning, creating a spectacular natural phenomenon.

But catching the elusive animal on camera is much easier said than done as their unpredictable nature makes photographing them extremely difficult.

Taken by wildlife photographers, Pat and Cindy Bonish from Cedar Key, Florida, the pair even managed to lose £5000 worth of photography kit whilst shooting the rays out-of-water-acrobatics. 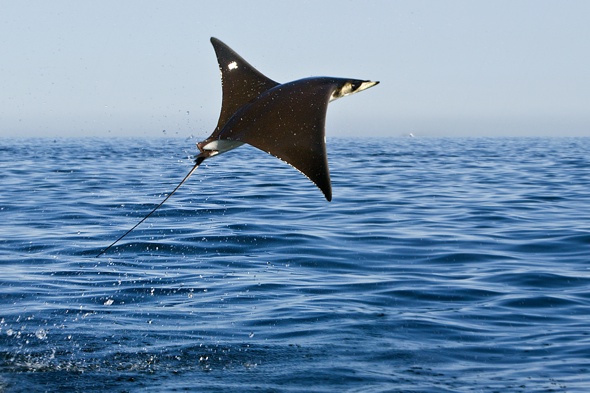 Pat told Caters News: "They have the name of Flying Mobulas due to the fact that they look like a soaring bird.

"Some look like they're trying to flap their wings in the air whilst others look as awkward as a fish out of water and will complete a full flip landing upside down on their backs.

"While loading the gear into the kayaks, I got Cindy out past the surf safely in her kayak and while I was trying to load into my kayak, I was hit with a wave that tipped me over, salt water and camera gear does not mix well and my gear sank in about 5 feet of water.

"They're one of the most elusive and hardest to photograph animals out of the water, almost everything else we've photographed to date has been a little boring compared to these magnificent creatures.

"It was beyond difficult to shoot the rays as the schools can be a hundred yards wide at time, you never know where one is going to jump.

"Sometimes they'll shoot out of the water 4 to 5 feet in height, other times they just skim the surface for a long distance.

"Luckily my wife and I have been shooting action type photography for years, so we both knew to have our cameras set with the correct exposures and settings and we were both using very fast lenses which helps lock onto a moving subject within seconds.

"I had never seen anything like this before and never heard of such a thing, they make a loud slap when their wings hit the water's surface upon re-entry.

"Suddenly the water is erupting all around you, you're getting splashed from how close they're landing to you, one landed half in the boat which caused a big commotion while soaking all of us.

"When you are right on top of them them, you soon realise how large they are and how high they're jumping out of the water."

'Flying' mobula rays caught on camera in amazing pictures
Up Next

Why did 250 stingrays wash up dead on a Mexico beach?