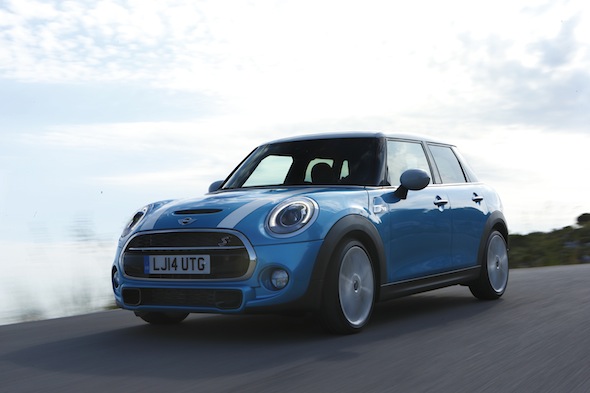 The majority of Mini owners are extremely pleased with their purchase but one major gripe that has lingered since BMW revived the iconic British brand surrounds the difficulty passengers encounter when they attempt to squeeze into the rear.
Front seats don't quite fold forward enough, the B-pillar is awkwardly in the way and the roofline is comically low, ensuring a graceful entrance for anyone over the five-foot mark is thrown straight out of the small window.

All that is set to come to an end as Mini begins manufacture of a five-door hatchback, which looks likely to become the German marque's best-selling model.

This is the first time in history the Mini Hatch has been offered with five doors and it also features an extended wheelbase to ensure rear passengers enjoy the extra 72 millimetres of legroom.

An additional 15 millimetres of headroom is also on offer as well as a third seat in the rear, another first for the hatchback model.

Practicality usually comes at a premium but Mini has stated that five-door customers will only pay around £600 more than the base price of the three-door version, despite boot space also increasing to 278 litres, bettering the Audi A1.

Because of this, industry insiders are predicting that the five-door model could account for around 150,000 units annually, providing a healthy boost to Mini's already impressive sales figures.

Mini unveils five-door hatchback
Up Next


The five-door Hatch will be offered with a number of engines - the Cooper D diesel unit offering a combined fuel economy of 78.5mpg and the speedy Cooper S petrol at the other end of the spectrum dispatching the 0-62mph sprint in 6.8 seconds.

A three-cylinder petrol engine, which is found in the entry-level Cooper, produces 132bhp, while a sportier 2.0-litre four-cylinder diesel engine resides in the all-new five-door SD model.

Both manual and automatic transmissions will be available from launch, although from experience test-driving the three-door hatch variants, we would suggest opting for the manual. The auto often muddled gearshifts, particularly when mated to the lower-powered petrol and diesel engines.