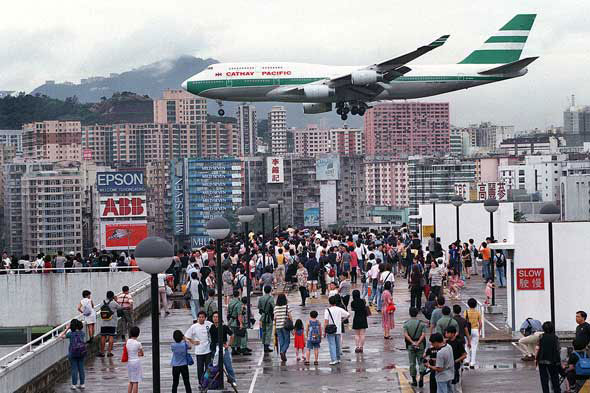 We all know that take off and landing is the most dangerous part of flying, which is one of the reasons most airports around the world are built in flat areas with lots and lots of space around them, with lovely long runways that are far away from things that might, er, complicate things, like buildings, volcanoes, mountains... you get the picture.

But there are some exceptions. If you're a have a fear of flying and want to know which airports you should avoid when you fly, then you've come to the right place. The slideshow below shows just a few of the places that are more 'scareports'. We've found one where planes can only land when the tide is out, another that has a rather short uphill mountain runway and another that is so close to the city centres that planes regularly appear to skim the tops of buildings (and sometimes people's heads...).

Have you flown to any of these? What was it like? Tell us below!

Planes can only land here when the tide is out. Washed by the sea twice a day, Traigh Mhor runway is reputed to be the only beach runway in the world to handle scheduled airline services.

This Alpine airport is home to an extremely short uphill runway (1,722 feet) - and there's a vertical drop at the end. Oh, and then there's the wind, sleet and snow - all of which play havoc with all things airbourne.

Skimming over the beach towards the 2,300m runway, this stretch of coastline sees a lot of daily traffic with the airport servicing around about 100,000 flights a year.

Located around five miles from the centre of Sao Paulo, Congonhas is one of the busiest airports in Brazil. The proximity to the city centre means it may feel like you're skimming the tops of skyscrapers as you land and take off.

Landing at Toncontin Airport is particularly challenging for pilots due to its proximity to the mountains. In 2008 after a tragic plane crash, the airport was closed to international traffic. A major review of airport safety took place and in May 2009 a runway extension was completed. But despite this, it still has one of the shortest international runways in the world.

An approach to this airport means traversing mountainous terrain and this sometimes involves flying over occasionally active volcanoes. A recent eruption from the Pacaya volcano in 2010 caused the airport to close. Planes run the risk of ending up covered in ash, as this image of a just-landed American Airlines jet shows...

Located in the Maiquetia region of Caracas, this international airport handles flights to many important cities in the Americas, the Caribbean, Europe and the Middle East. Its proximity to buildings and mountains make it a technically very difficult landing strip.

Used mainly by the US Antarctica Program during the summer, this sea-ice runway has to be constructed every year as it melts around December time. Pilots who've landed on the ice say it's much like landing on concrete initially, but when the plane comes to a standstill its wheels sink a into the ice. Don't miss our feature: Revealed! The world's worst airlines!

Pilots had to be extremely skilled to negotiate numerous skyscrapers and mountains before landing on a runway jutting out into Victoria Harbour.

Between 1925 and 1998 Kai Tak served as the main airport in Hong Kong. It has now been replaced by a new airport at Chek Lap Kok.

One of Gibraltar's busiest roads, Winston Churchill Avenue, crosses directly over the runway for North Front airport. This means that the road can be closed for around two hours a day - mainly servicing planes to and from the UK. A tunnel under the runway is due to be completed in 2012.

Photos: abandoned airports around the world

10 PHOTOS
The worst airports in the world 2011
See Gallery

The NAIA in Manila has been voted as the 2011 world's worst airport by users of the online travel website The Guide to Sleeping in Airports (sleepinginairports.net), based on reader reviews and poll votes. The website listed reasons such as safety concerns, theft, poor facilities, bribery and lack of comfortable seating. One reader said: 'You will not want to even close your eyes here! Bribery and theft exists. Airport taxes are collected, but the money does not seem to go towards the betterment of the airport.' In terms of facilities, passengers may have better luck at the newer Terminal 3, where it is clean, spacious and offers an internet connection.

It might be the largest airport in France - and one of the busiest in the world - but Paris CDG, which opened in 1974, has since frequently been criticised for its confusing layout, rude staff and ugly buildings. What's more, the seating benches have been deemed uncomfortable and insufficient, and homeless people are said to frequently disturb sleeping travellers.

In a Priority Pass survey in 2010, London Heathrow was voted the least favourite airport, owing to the fact that it is also one of the world's busiest. The problems of winter 2010, when the airport was ill-prepared for bad weather and snow grounded thousands of flights, further weakened its image. Long security queues and hours waiting at  the baggage line have also been cited.

According to Independent writer Peter Popham, Delhi airport's 'carpeting is a thin scarlet runner, and stains are splattered in corners. Creature comforts are negligible. Passport control takes an eternity. Half the trolleys are broken down. They force you to x-ray your luggage coming in to the country as well as going out.' And, according to a survey by Foreign Policy magazine, it also boasts 'aggressive beggars, syringes on the terminal floor, and filthy bathrooms'.

According to reports, 'the odour of faeces and urine abound in this airport, which no doubt attract the hoards of rats, cockroaches and other bugs that scurry around the departures and arrivals area.'  There's also been talk of overflowing toilets, and passengers escaping the airport chaos only to be mugged or beaten on the tarmac outside.

The San Francisco Chronicle describes LAX as 'eight terminals connected by a traffic jam'. And, according to sleepinginairports.net, seating is limited, rude security staff 'automatically assume you are a terrorist or that you will never leave their country', bathrooms are in poor condition, signage is poor, and there are no conveniences for people in transit.... 'not even a 24 hour coffee shop.' Ouch.

This small airport in the town of Lukla in eastern Nepal is popular as it is the gateway to the Mount Everest region in Nepal. But it will give you a nail-biting landing, involving a plummet onto an uphill airstrip cut into the side of a mountain. And on takeoff, the airstrip comes to an abrupt end at the edge of a mountain cliff.

At Dakar's airport 'there is only squalor, an unnerving sense of confinement, and to some extent danger,' said salon.com's Patrick Smith. Foreign Policy magzine's survey concurred, writing: 'Dakar has no seats and travellers are targeted by hawkers, porters and security guards who move them on. Immigration takes three hours.'

Simón Bolívar International, known locally as ‘Maiquetia’, is the main international airport in the South American state of Venezuela. It is located around 29km from the centre of the capital, Caracas, and is described as being 'situated practically in the middle of the favelas'. Hundreds of travellers have been robbed or mugged as soon as they left the airport, while kidnapping, stabbings and shootings 'have all occurred before passengers have even reached the taxi line', according to the Matador Network. What's more, you'll be charged a $53 airport tax for the privilege.