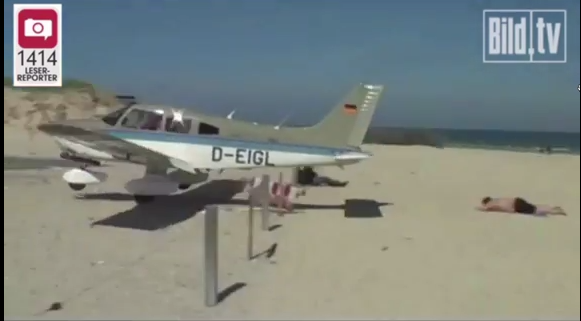 A pilot narrowly avoided a sunbather in Heligoland as he crash landed his plane on a beach.

The holidaymaker was soaking up the sun on the island in northern Germany when the plane glided over him, just inches away, as it came in to land.

Pilot Juergen Drucker, 52, barely avoided the man on the beach before hitting a fence and ploughing across a section of the beach before coming to rest on the runway as he flew his Piper PA-28-181 Archer II along the coast, reports the Metro.

He later apologised for the close call.

'It was me that was flying and I am really sorry. I have to say, as the pictures show, that it wasn't one of my greatest achievements in the cockpit.

'In my defence I can say that I didn't see him because he was lying down and I'm just very grateful it worked out well and I didn't land on him. I don't want to say any more than that. I fear I will be in for a fine from the Federal Aviation Office but I hope I will be able to keep my licence.'

Despite the dramatic crash landing the plane suffered only minor damage and the pilot was able to fly home the same evening.

Plane crashes in East London... but it's just a simulated accident (photos)