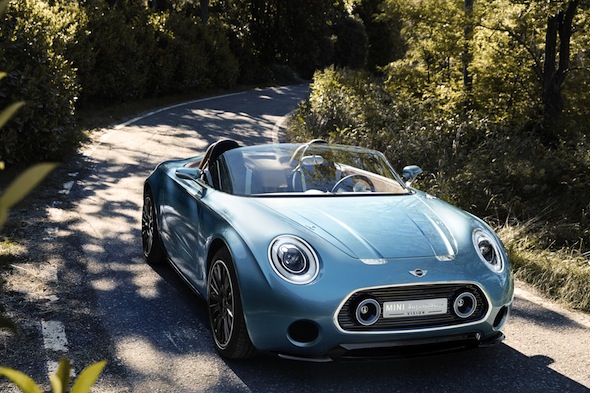 There has been an unlikely centre of attention at this year's Concorso d'Eleganza on the shores of the beautiful Lake Como and it wears a Mini badge.
Considering the weight of exotic motorcycles, eye-catching concepts and rare classics on display at the weekend, it was surprising that a small, sporting two-seater Mini managed to gain the most column inches.

But one look at the gloriously retro machine and the attention is understandable.

The open-top two-seater was created by Mini and Touring Super Superleggera, an iconic coach building design house based in Milan, and features the exterior of a classic British roadster with the interior of an exotic Italian Gran Tourer.

Classic Mini touches, such as the circular front headlamps and bulging wheel arches, feature heavily on the lightweight concept, as well as uniquely British elements - including Union Jack-inspired rear lights.

Inside, the car uses a similar carbon fibre-reinforced material to that found on BMW's i3 and i8 models as well as swathes of polished aluminium and high quality leather.

The BMW-owned marque has been tight-lipped about performance figures but we do know that an electric motor and battery packs propel this particular concept, although engineers have said that the elongated bonnet will easily house Mini's current engine line-up – including the potent 220bhp 2.0-litre unit found in the JCW models.

Industry insiders believe that we could see something similar to the Superleggera concept on roads as early as 2015, mainly due to the fact that Mini's current Roadster and Coupe models aren't selling particularly well.


What do you think of the new concept? Let us know in the comments section below.
Tags
Read Full Story