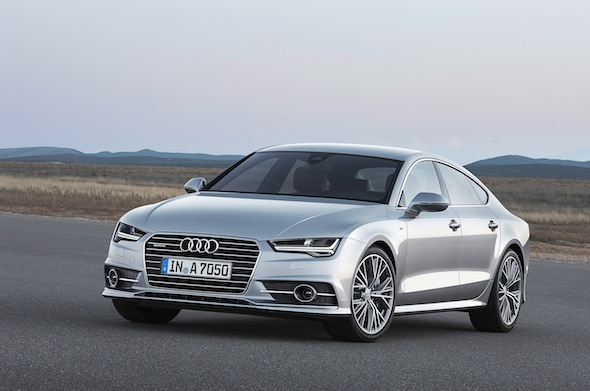 Audi has refreshed its A7 model range with revisions to styling and interior kit, as well as the introduction of a new 'Ultra' model capable of returning over 60mpg.
UK prices have yet to be confirmed for this new version of the Ingolstadt brand's svelte four-door coupe, but are expected to be announced closer to the car's showroom debut this winter. The range currently starts from £41,175.

The biggest addition to the line-up is a new 3.0-litre diesel Ultra model. Developing 215bhp, it returns an average of 60.1mpg and emits a road-tax friendly 122g/km CO2. Unlike most of the range, which is equipped with Audi's Quattro four-wheel-drive system, the Ultra model is available in front-wheel-drive configuration only.

Both the standard A7 and the sporty, V8 powered S7 variant have benefitted from the mid-life facelift, the most obvious visual alteration of which is the introduction of LED headlight technology as standard across the range. They are joined by 'dynamic' indicator lights at the rear, which illuminate in a sweeping pattern in the intended direction of travel.

Subtly reshaped bumpers, new hexagonal styling for the front grille and a trapezoidal design for the exhaust tailpipes complete the exterior makeover.

Inside there is an improved range of trim and upholstery options, including silver leather and aluminium/walnut inlays in a pinstripe design. Audi's MMI touch infotainment system also benefits from a software upgrade and 4G mobile Internet connectivity.

Under the skin, a new seven-speed S tronic transmission replaces the CVT unit in front-wheel-drive models, while a sports differential is offered as an option on Quattro models.

Refreshed Audi A7 unveiled
Up Next

NHS trusts call for detail on ventilator capacity as new order placed for 10,000