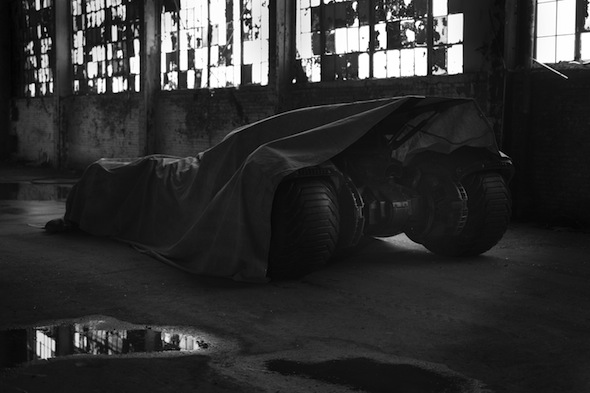 Comic book fans have been getting all hot under the collar of late as director Zack Snyder has been surreptitiously tweeting titbits of information surrounding the upcoming Batman vs. Superman film.
We know that it is a sequel to the recent Man of Steel film, it stars Henry Cavil as the bespectacled super hero and Ben Affleck as the Gotham City crime fighter and 300 director Zack Snyder is on board to make sure it will be suitably gritty.

Further plot details are scarce but social media users have just been treated to a sneak peek at the new Batmobile – the unsung hero of the recent Christopher Nolan-directed Dark Knight franchise and certainly one of the most iconic elements of Bruce Wayne's arsenal.

Snyder tweeted: "Could be time to pull the tarp... tomorrow?" accompanied by a teaser image of the new Batmobile.

It appears the vehicle has borrowed a few styling cues from Christopher Nolan's Tumbler - namely the chunky rear wheels and raised ride height - but the classic layout of a narrow front axle and wide rear track provides a reference to the original Tim Burton creation from 1989.

Snyder's tweet alludes to the fact that we may be treated to a full reveal tomorrow but lets hope it is based on real running gear. There was nothing cooler than watching the 5.7-litre Chevrolet-engined Tumbler hit the streets once its filming duties were complete.