Cyclists could have priority on urban roads 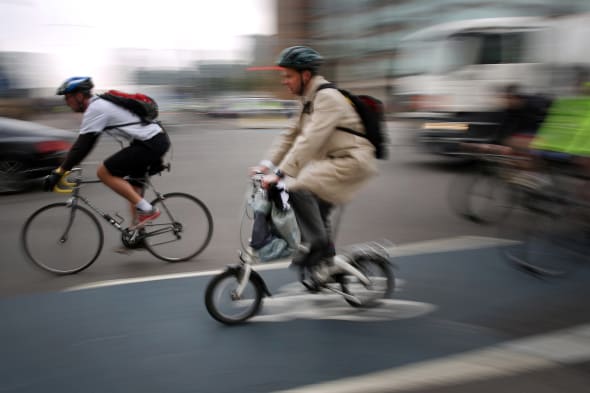 A recent proposal from roads minister Robert Goodwill could see motorists restricted to just 15mph and fined if they are caught overtaking cyclists on suggested purpose-built "cycle streets".
The proposed cycle-friendly routes would only appear in "lightly trafficked" urban areas where "cycle flows are high" but could feature a 15mph speed limit and strict rules on passing slower cyclists.

Those caught breaking the rules could be handed a £100 fine and face three penalty points on the driving licence.

Robert Goodwill, who is responsible for road safety and standards in the UK, has suggested a number of changes in a recent Department for Transportation consultation document that aims to make roads safer by reforming traffic regulations and improving signage.

The "cycle streets" will only be proposed in areas that have already made a commitment to cycling, according to the document. London, Manchester, Birmingham, Newcastle upon Tyne and Oxford have all been slated to trial the cycle safety solutions.

"This is a bold initiative, which is being considered by some of the Cycle Cities and London, possibly including a ban on overtaking on lightly trafficked roads where cycle flows are high. Subject to any scheme trial, this prohibition could be accompanied by an advisory speed limit of 15mph," the document says, according to The Guardian.

British Cycling has backed the proposed changes, saying: "We still need the leadership to ensure these designs make it onto our roads, a national commitment to grow cycling levels, and it must be backed by a long term budget-line.

"Only then can we say that the Prime Minister's ambition of creating a 'cycling revolution' can be achieved."

The consultation ends in June.

Do you think it is a good idea? Let us know in the comments section
Tags
Read Full Story Click here to comment