Family reunited with dog they thought was killed in Hurricane Sandy 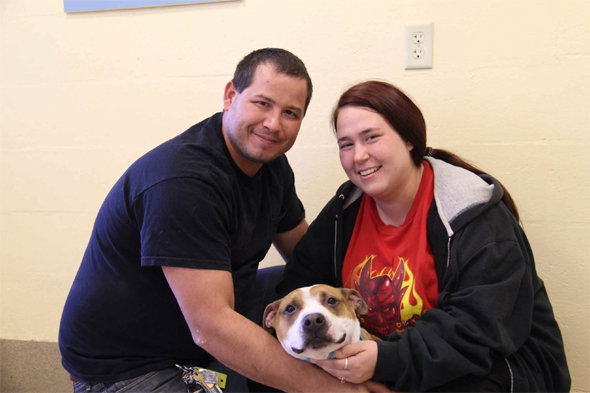 A dog that went missing 18 months ago when Hurricane Sandy struck America has been reunited with its owners after they visited an animal rescue centre to adopt a new one.

Chuck and Elicia James, from New Jersey, got the surprise of their lives when they went to their local animal shelter and the first dog they were introduced to was Reckless, their brown and white terrier-pitbull.

Reckless went missing during Superstorm Sandy when the fence at their home came down, CNN reports.

While the family never stopped looking for their beloved dog, they decided to adopt a new one for their 10-year-old daughter's birthday.

"He jumped 3 feet in the air," James said. "He immediately recognised us. And then the tears came - there wasn't a dry eye in the place."

Animal shelter Monmouth County SPCA told CBS Local the dog, they named Lucas, had come in to the shelter in November and always appeared to be waiting for his family.

In January, a dog that was reported missing two years ago was found swimming off the coast of Florida.

The dog was rescued by fishermen a mile off Tampa Bay and was wearing a collar with the name Baby.

Fisherman Tony Basile found her and took her onto his boat, wrapping a towel around her.

Speaking to WFLA after he found her, he said: "We got her to start drinking and eat some food. She's in need of a good cleaning, but she's totally bonded to me. I can't take a step off the boat and she'll start screaming and yelling. I walk with her; she stays right by my side."

After Basile cared for her, Baby found a new permanent home.

New owners Kathy and Larry Klein saw news coverage of Baby's rescue and went to look for Tony's boat to offer donations for the dog but ended up adopting her.

Video: Labrador rescued after falling into sea from cliff in Pembrokeshire