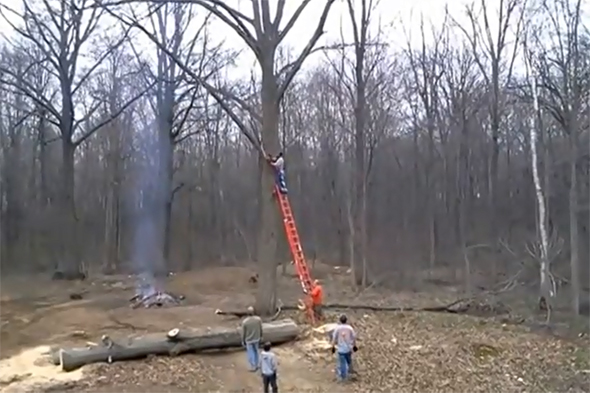 A man trimming a tree in America learned the dangers of messing with Mother Nature the hard way.

In a new YouTube video, the man is seen at the top of a ladder yelling, "I don't want to hit anybody, is everybody good?"

He then cuts a branch and as it starts to fall it swings back towards him and throws him off the ladder onto the ground.

She then runs over to the man.

YouTube user Kurt Stepp posted the video on the social networking site and captioned it: "My coworker cuts down a tree and the tree is not very happy about it."

The video has been viewed over 478,000 times and users have left comments advising Kurt's co-worker how he should have cut down the tree.

One wrote: "Wow. Seriously, your coworker is not going to survive for very long if he doesn't start:

1. Roping himself off at 15-feet heights.
2. Not standing on the very top rung of a barely-secured ladder
3. Making a bottom cut first
4. Not trying to cut above his own height, and, for f**k's sake
5. Not trying to use a chainsaw one-handed"

Another wrote: "You should always cut from a higher altitude from the branch, you should be looking down at it not up."

Kurt later confirmed that his coworker escaped without serious injury.