Russian millionaire racer is the embodiment of 'all the gear, no idea' 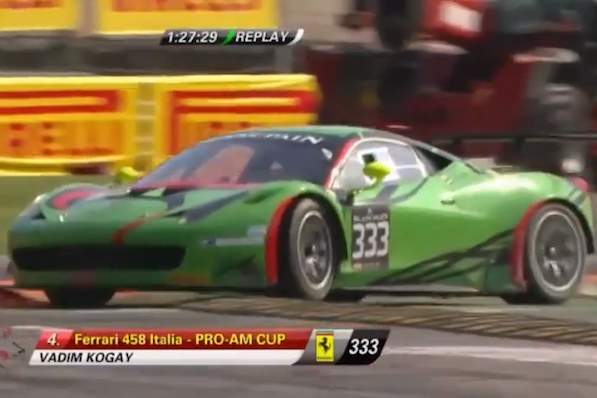 When most people get the itch to go racing, they book a place at a local track day, invest in a few lessons and enjoy scorching around Brands Hatch and the like in a Seat Leon Cupra for a couple of hours.
Not Vadim Kogay. The Russian millionaire went out and purchased a Ferrari 458 GT3 and entered it directly into the exclusive Blancpain Endurance Series.

Footage captured at the notoriously tricky Monza circuit in Italy last month proves that just because you can afford it doesn't mean you can necessarily drive it, as the madcap Russian bumps over kerbs, cuts up fellow competitors (who are predominantly lapping the poor chap), runs into the gravel and spectacularly bins it while the race is under a cautionary yellow flag.

The aforementioned incident forces the commentators to exclaim, "What is he doing?" while another calls for some kind of divine intervention to ensure the plucky daredevil doesn't kill himself... or others.

Drivers desperately flash Mr Kogay, the team bellows over the radio and those in the crowd wince at every corner, yet the headstrong amateur insists on getting his money's worth. Until he crashes with such ferocity that he punctures a tyre and is forced to limp into the pits.

We have to hand it to the man, he has a serious set of cojones to even consider racing against some of the world's top drivers... in a Ferrari 458 GT3... at Monza.

Watch the video footage below