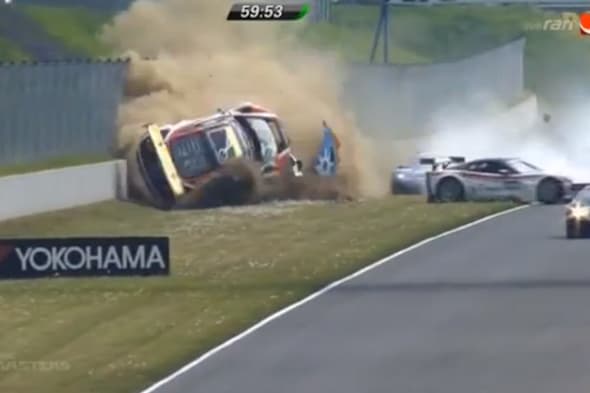 Only the most avid motorsport fans will have watched the ADAC GT Masters at Germany's Oschersleben circuit this weekend, but those who tuned in witnessed one of the most dramatic crashes of the year.
The collision involved several cars along the start/finish straight as the racers jostled for position following a rolling start. The Prosperia C. Abt Racing Audi R8 LMS ultra of Nicki Thiim took the brunt of the impact, slamming into a wall and barrel-rolling along the grass surrounding the circuit.

The 25-year old, who took first place in the GTE-Am class of the FIA WEC Six Hours of Silverstone recently, was evaluated at the circuit's medical centre but later released.

For those curious, the ADAC GT Masters is a Pro-Am contest similar to FIA GT3, which sees one professional driver and one amateur take turns during a gruelling endurance race. The cars - which include Lamborghini Gallardos, Audi R8 and Ferrari 458s - are performance balanced to ensure they are as closely matched as possible.

Check out the crash below