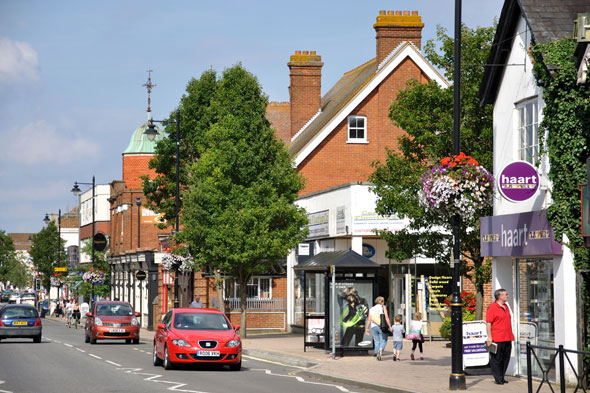 Are you happy with where you live or does your local town leave you feeling down in the dumps?

The Office of National Statistics (ONS) has investigated the link between British towns and the moods of its citizens and it turns out that our surrounding do have an impact on our quality of life.

In 2013 the ONS asked people to rate their life satisfaction and personal wellbeing on a scale of zero to ten - zero being "not at all" and ten being "completely".

Although you might expect bustling cities with plenty to see and do the happiest of locations in Britain, the results from the study demonstrated the opposite.

Turns out wealth is not as important as you might think in determinging happiness.

"London has the most disposable income but very little life satisfaction and very high anxiety," said Dawn Snape, head of personal wellbeing at the ONS.

According to Dawn, the factors most associated with personal wellbeing include health, employment and relationship status.

People who live in towns including Reading, Slough, Milton Keynes and Brighton are among the most anxious in the country, suggesting that those who have to face a daily commute tend to be less happy.

We've rounded up the top ten happiest areas in the UK. Have a look at the gallery below to see if your town features.

According to the Met Office, Eastbourne is the sunniest place in the UK. With beautiful coastal scenery and plenty of Vitamin D to go around, Eastbourne residents have plenty to be happy about.

Rightmove surveyed 40,000 people on 110 towns to find the happiest residents and Harrogate came out on top. According to the report, Northerners are happier about where they live than Southerners, with nine of the ten ‘unhappiest’ locations in Greater London.
Fleet in Hampshire has been named the happiest place to live in the UK for the last three years running. The annual Halifax Quality of Life survey found that the town scored highly on everything from weather to employment. Residents of the area are also among the healthiest in the country, with 97.4% reporting to be in good health.

According to the Office of National Statistics, people who live in rural areas are happiest. Those living in Orkney report the highest levels of life satisfaction, self-worth and happiness across the whole of the UK. They also report low levels of anxiety.

Stockport in Manchester came second to Harrogate in Rightmove's 2013 happiness report. The area is surrounded by scenic loacations including Alderley Edge, Buxton and Cheadle.

Travel site Jetpac analysed 100 million Instagram photos in an attempt to build a recommendation system based on geotagged images. According to the results, Belfast is the happiest city, specifically the Parlour Bar in the city.

Ipswich came third in Rightmove's happiest places in the UK report. The report also found that residents of Ipswich were the most contented residents in the country.

In Jetpac's innovative Instagram survey, Bournemouth proved to be the second happiest place in the UK.
Exeter topped Rightmove's list of 110 locations for neighbourliness.
Fleet in Hampshire has been named the happiest place to live in the UK for the last three years running. The annual Halifax Quality of Life survey found that the town scored highly on everything from weather to employment. Residents of the area are also among the healthiest in the country, with 97.4% reporting to be in good health.
The town of Thaxted offers cheap property in comparison to the surrounding area of Essex. The countryside town also offers easy access to London making it the second happiest town in the UK, according to the Halifax Quality of Life survey.
Up Next

Bristol named the best city to live in Britain

Now see the towns that have been rated the ugliest in Britain!