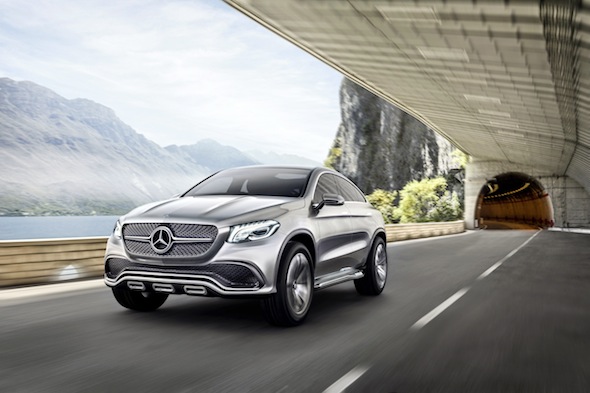 Mercedes-Benz has recently previewed its intentions to couple sleek coupe styling with the high-riding road presence of an SUV with this, the aptly named Concept Coupe SUV.
Although this is merely a showpiece for now, the model unveiled in Beijing earlier this week was very close to being production-ready. According to the marque, it is based on the M-Class platform but sits 131mm longer, 118mm wider and 57mm lower than the vehicle it is likely to be built alongside.

The slippery coupe body, steeply raked windshield and deep gouges in the flanks nod towards its sporting intentions, which are backed-up somewhat by the announcement that a 328bhp twin-turbo 3.0-litre V6 petrol engine resides underneath its bonnet.

The timing of the reveal is crucial, as many premium manufacturers have revealed they will soon unveil a swathe of new SUV models. Bentley announced it is currently working on a hybrid 4x4, while the BMW X6 and Porsche Cayman are due an overhaul in the coming months.

Mercedes has remained tight-lipped with regards to pricing but industry insiders believe it will be on sale as early as next year and rumoured that it would be available in AMG guise – complete with a new 4.0-litre turbocharged V8 engine.
Tags
Read Full Story Click here to comment