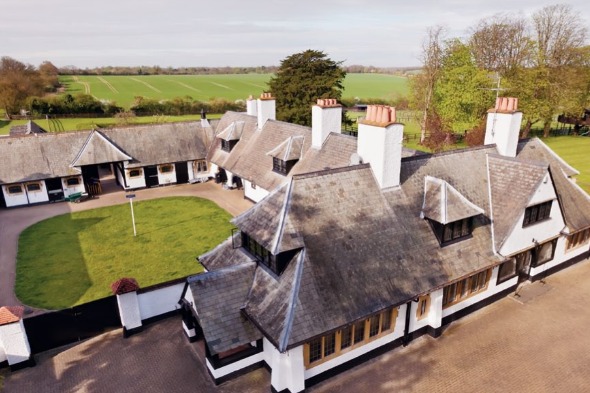 Frankie Dettori has put his huge Newmarket estate on the market for £2.75 million. The buyers will get a Grade II listed estate - with its own stables and 14 paddocks; along with a swimming pool, sauna, and five bedrooms. If that's not enough for your money, you get a guest cottage thrown in as part of the deal.

But would you buy it - or would you prefer a different celebrity pad?%VIRTUAL-SkimlinksPromo%

The Cambridge News reported that the White Horse Stables is an Arts and Crafts house built at the beginning of the 20th century. It's a dream home for a horse racing fan with their own horses. The estate in Newmarket, Suffolk (a stone's throw from racing HQ) has been Dettori's home for for the last 16 years.

Horses staying here can be sure of a life of luxury. They have their own stable yard with seven stables and feed rooms - there are also 14 fenced paddocks on the 15-acre estate, and a riding school.

And it's not just the horses - the owners should have their fair share of the high life too, as the five bedroom house also has five enormous reception rooms including a sparking marble-clad kitchen, a huge dining area, and a luxury lounge (complete with glitter ball). The master bedroom also comes with its own dressing room and en-suite bathroom.

For non-horse-related entertainment there's an indoor pool, sauna, and games room. And the kids will appreciate the tree house and summer house in the garden too.

Dettori told the Daily Mail he was moving into a property that was was being built for him in Hare Park Stud at Six Mile Bottom where his wife's family live.

Would you buy it?

Even without the celebrity link, the home is highly desirable, and reasonably priced for the area. The agent has another five-bedroom property with stables on the market at £3.5 million. It's true that there are beautiful homes in the area with more bedrooms for up to £1 million less. However, they don't come with the rest of the facilities on the estate.

The celebrity link, meanwhile, has already started to draw potential buyers. The estate agent told the Daily Mail that there has already been a huge amount of interest in the property from all over the world.

Of course, you're going to be need to be quite horse-focused for this home to float your boat. If you're not convinced, exactly the same sum would buy you Keira Knightley's four bedroom Hugenot house in Spitalfields, East London.

Or you could go for Kate Winslet's 15th century house in the South Downs, which is reportedly for sale on the private market for £2.3 million.

Alternatively, you could save a packet and go for Alesha Dixson's former home in Welwyn Garden City on the market for a much less challenging £1.5 million.

And even more cheaply you could buy Jeremy Clarkson's childhood home. Home Farm is a picturesque, Grade II listed farmhouse, with views over the Yorkshire countryside. The asking price is just £595,000 - and it has been on the market for 18 months - so you could try making an offer.

The house is in Welwyn Garden City, where Alesha grew up.

The house has a sitting/dining room, study and kitchen/breakfast room, along with a second kitchen and utility, with the layout meaning that it could be used as two houses.

The glamorous three-bedroom property has a Hollywood style vanity area in the bedroom.

The home features a Sonos integrated sound system, and even the master bathroom boasts its own inset television. It also boasts a 25 foot dressing room.

Outside, the landscaped garden features a series of decked terraces, a sunken seating area with fire pit and Japanese garden - along with a fenced dog run.

The Hertfordshire property is named Rosewood and has been extensively refurbished.

5 talking points ahead of the French Open