Moment truck flips and slams into car captured on film 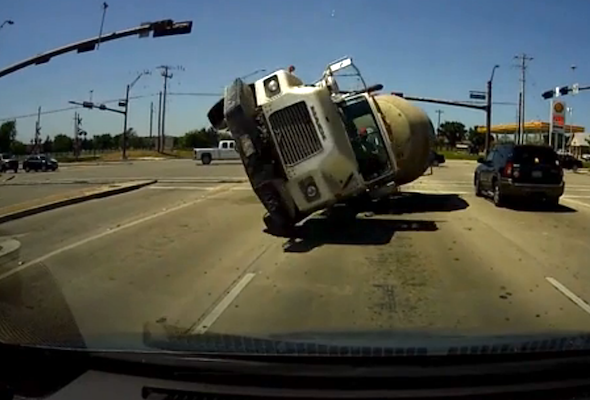 The instant a cement truck ran a red light, flipped and careered into a people carrier has been captured on a dash-mounted camera.
Shocking footage captured by veterinary professor Dr Ghuan Zhu's dashboard-mounted camera shows the out-of-control cement truck navigating a crossroads at speed, before tipping over and sliding head-on into his vehicle.

Amazingly, Dr Zhu walked away from the scene without serious injury and was even able to laugh about the incident afterwards.

According to CBS News, the cement truck ran a red light at the intersection and toppled over when the driver attempted to take evasive action to avoid hitting traffic that was already crossing.

The violent change of direction was enough to unsettle the truck's centre of gravity, forcing the rear of the HGV to tip over and eventually slide into Dr Zhu's people carrier.

Dr Zhu revealed that he fitted the dash-mounted camera after being involved in an accident around a year earlier. He told CBS News that he has since watched the footage again because he couldn't remember the incident happening.

Surprisingly, the veterinary professor walked away with just a cut to his leg, while the truck driver also avoided serious injury.

Police revealed that they did hand the HGV driver a ticket for running a red light.

Watch the CBS News video below. The crash happens in full at the 1 minute 40 seconds mark.