Guess how much this tiny cup is worth 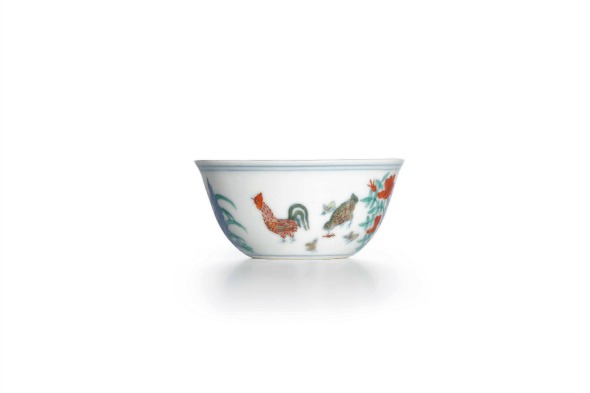 A small white cup - measuring just 3.1 inches in diameter - has sold at auction in Hong Kong for an incredible £21.5 million. It's the highest price ever paid for a piece of Chinese porcelain.

It's incredible; but it's not the first piece of Chinese art to have fetched an astonishing price.%VIRTUAL-SkimlinksPromo%

The cup is decorated with a rooster, a hen and their chicks. The reason for its value is partly because it is so old. It was made during the reign of the Ming Dynasty's Chenghua Emperor, who ruled from 1465 to 1487. The other reason for its value is rarity: there are only 17 of these cups in existence, and 13 of them are in museums around the world - so there are only four available to private buyers.

Nicolas Chow, Deputy Chairman of Sotheby's Asia and International Head of Fine Chinese Ceramics and Works of Art, said: "We are thrilled that The Meiyintang Chenghua 'Chicken Cup' is returning to China where it will take its place at the heart of the collection of Mr. Liu Yiqian. This Chicken Cup is sure to become a destination piece drawing visitors to Mr. Liu's Long Museum."

It's now the most expensive piece of Chinese porcelain ever sold - beating the former record-holder (a yellow vase from the Qianlong period which sold for £19.4 million in 2010).

And it's one of a number of incredible sales of Chinese art.

One of the most astonishing was the 16 inch Chinese vase that a couple had inherited and put up for sale in 2010. The bidding reached a record £43 million. Sadly the buyer then pulled out, but last year the couple finally secured a sale - for £23 million

Then there was a cracked vase, which was being used as an umbrella stand by a couple in Dorset. It turned out to be a 1740 pot made for Emperor Qianlong and sold for £750,000.

Last year, a couple invited a Christies auctioneer round to value some of their belongings. While he was there, he spotted a yellow vase decorated with enamel bats flying around clouds, which was holding flowers on the top of a chest of drawers. He persuaded them to sell it, and it fetched £2.65 million at auction.

One sale which was notable for its unexpected result was in February this year when an elderly man's family found four Chinese panels lying around his home so put them up for sale. They had been bought in the 1960s and valued at £300, but sold at auction for £42,000.