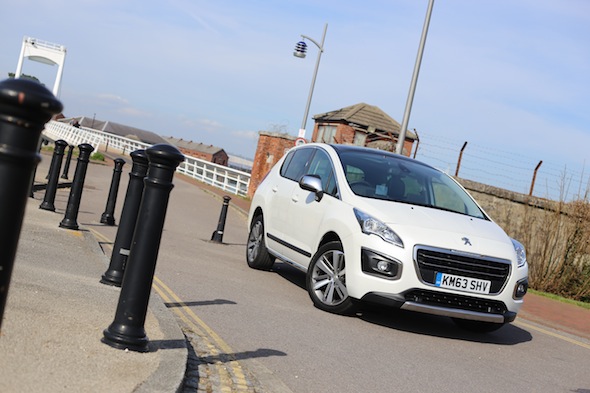 I'm not sure if you've noticed, but Peugeot's been on a bit of a roll lately. First there's the new 308, which has just been handed a European Car Of The Year gong. Then there's the head-turning RCZ coupe, and the rather appealing 208 hatchback that we had custody of last year.
Sadly Peugeot didn't relent to our frequent cries for custody of a 208 GTi, but no matter, we've been handed the keys to the popular 3008 Crossover instead.

Rather than simply driving it round the block and handing the keys back, I decided to give it a proper run – all the way to Peugeot's UK home of Coventry and back. A thrilling first journey for any new car, I think you'll agree.

Long term report: Peugeot 3008
Up Next


So first impressions then – let's start with the good bits.

Our model has Peugeot's fab 1.6-litre diesel engine under the bonnet (the same one you'll find in Fords, Citroens, Volvos and even the old Mini Cooper D), and comes in top-spec 'Allure' trim with all the imaginable toys. The interior is roomy, it handles fairly neatly for a high-riding hatchback, and it's not exactly uncomfortable either. My favourite feature? The split tailgate, which should stop me falling out of the boot camera-in-hand every time we do a video shoot.

The bad bits? Just the one so far: the colour. The Car Dealer car park is now so full of pearly white models that it's starting to look like Dale Winton's jawline. If I'm honest, I haven't exactly fallen for its pseudo-4x4 appearance either, but that's nothing a surf board on the roof couldn't fix. Probably.

Aesthetic quibbles aside though, I'm quite looking forward to the Pug's tenure. The first order of business: keeping James Baggott out of it. He's going to take one look at that split tailgate and start pretending it's a mini-Range Rover.

It's another Peugeot – we love Peugeots