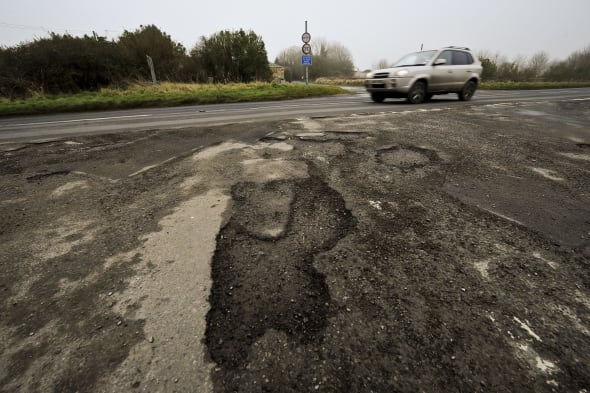 The cost of fixing all the potholes in England and Wales has now shot up to an estimated £12bn, according to a report out today.
And the Asphalt Industry Alliance said in its 19th Annual Local Authority Road Maintenance survey that the damage caused by this winter's record rainfall is likely to thwart a lot of the work done filling in more than two million potholes last year.

The £12bn one-time cost to get the local road network back into a reasonable condition is up from last year's estimate of £10.5bn.

According to the survey, which was completed by 74 per cent of local authorities responsible for roads in England and Wales, it will take 12 years to clear the backlog, not including London – and an incredible 14 years in London alone.

The news comes in spite of a 20 per cent drop in the shortfall in annual road maintenance budgets reported by local authorities, down from an average of £6.2m to £5.1m per authority in England, because they invested more in their road-maintenance programmes last year to try to catch up on necessary work following the previous wet winter.

Alliance chairman Alan Mackenzie urged the government to bring in an "invest to save" policy, saying: "These figures are disappointing for everyone who has worked hard together on the Highway Maintenance Efficiency Programme (HMEP) initiated by the Department for Transport.

"It's thanks to HMEP that so many highways departments have successfully made the case to their councils to invest in more repair to avoid further deterioration and costs. To see that work washed away is discouraging to say the least.

"The government has recently made significant additional funds available to help combat the results of the relentless rainfall this winter, but money spent on repairing damage never goes as far as money invested in planned, preventative maintenance. It costs at least 20 times more per square metre to fill a pothole than it does to resurface a road."