Harley-riding US Cop proves the fuzz can have fun 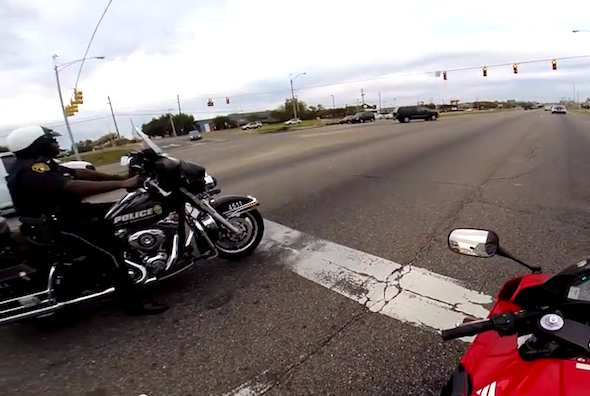 Carry out a vox pop on the streets of Britain, asking passers-by what they think of the police and it's likely the responses won't be glowing.
Trust in police has been 'severely shaken' by recent corruption scandals, a major report recently unveiled, and it's fair to say that the boys in blue could probably do with a bit of positive publicity right now.

Perhaps a short video like the one above could help? Captured in the States by a helmet-mounted camera, the video shows a Honda CBR600 RR sportsbike rider enjoying a friendly exchange with a US cop on a Harley-Davidson.

The Honda rider can be seen pulling up next to the cop at a set of traffic lights on a three-lane American road. The pair exchange a few pleasantries before the jovial policeman shows the biker what his Harley-Davidson hog can do.

Amazingly, the big cruiser pulls away, leaving the superbike rider to play catch-up.

At the next set of lights the Honda rider mentions something about, "paying attention to the lights this time," as they ready themselves for another drag race.

The Honda rider tears away during the second race, popping a wheelie under heavy acceleration, leaving the policeman in his wake.

The pair eventually exchange a friendly wave before heading in separate directions.

Potential dangers aside, it's nice to see the public engaging with police in a friendly manner for once... Even if it is on the other side of the Pond.