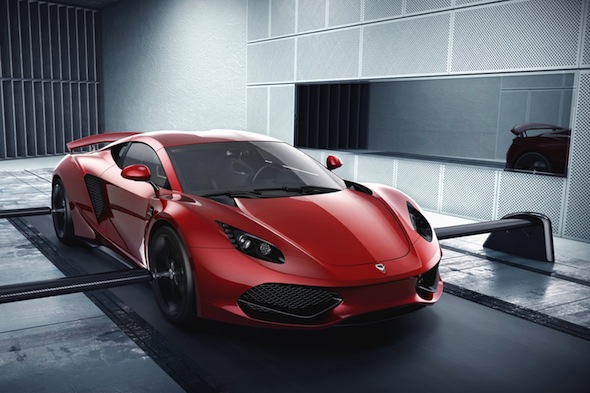 This is the Arrinera Hussarya and it is set to take the fight to the likes of Ferrari, Lamborghini and Porsche with a 6.2-litre V8 that's capable of producing 644bhp and an almighty 820Nm of torque.
But this car doesn't hail from Italy or Germany, it is the brainchild of Lukasz Tomkiewicz, a Polish businessman with over 14 years experience in the automotive industry.

The vehicle was previewed last year as a pure concept but after months of testing and fettling, the car has now been unveiled in production form, boasting lightweight carbonfibre bodywork and a brutal V8 engine borrowed from GM.

Performance figures will be suitably impressive, with the 0-62mph dash taking just 3.2 seconds and a top speed of 211mph. Like all good performance cars, power is sent to the rear wheels via an automated-manual gearbox.

The chassis and bodywork has been designed by Lee Noble – the man behind Noble automotive and the powerful M600 supercar – and will be fashioned out of tough yet lightweight materials such as Kevlar and carbonfibre.

Potential customers will be able to specify a track pack option, which adds bucket seats, four-point race harnesses, stiffer suspension and lower profile tyres but those looking to simply cruise to the shops will be treated to air-con, Bluetooth and a reversing camera.

A price for the Polish performance machine hasn't yet been specified but expect it to be over the £100k mark.

Wraps come off the first Polish supercar
Up Next