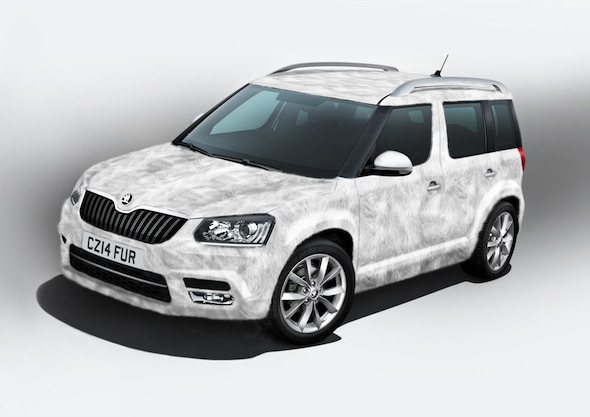 It's April 1st and plenty of big businesses are taking to the social media networks to 'prank' customers with fake products, false announcements and barmy banter.

But the automotive industry seems to be on overdrive this year as the zany press releases have been flooding the AOL Cars inbox all morning.

Below is a selection of the 'best' April Fool's Day jokes of 2014...>
Fur Yeti fans everywhere – the Yeti Ice Special Edition

On sale today, the new model pioneers a radical new faux fur finish that has been developed by Skoda engineers working in the Himalayas.

The Yeti Ice's faux fur has numerous advantages over traditional paint, as its inventor, Dr Yu Ciddingme explains: "The fur is so thick and luxurious that during our tests in the arctic circle, our test drivers didn't need to use the heater."

The new model is based on the new Yeti and Yeti Outdoor launched in January and was developed under the code number 010414. All models will be built to order with owners able to choose from a number of personalisation options, including side-partings and fur extensions.

Owners will find that maintaining the Yeti Ice's fur is easy thanks to standard specification that includes a lifetime supply of Skoda-branded shampoo and conditioner, a comb and brush kit to preserve the well-groomed look.

Head of Special Developments, Prof Lukat Thedate said: "Everybody loves the new furry finish. People like to give it a hug and a tickle under the bumper."

For those who would find the Yeti Ice's faux fur to be impractical, models with more traditional paintwork finishes are available in Skoda retailers across the country with prices starting from £16,600. 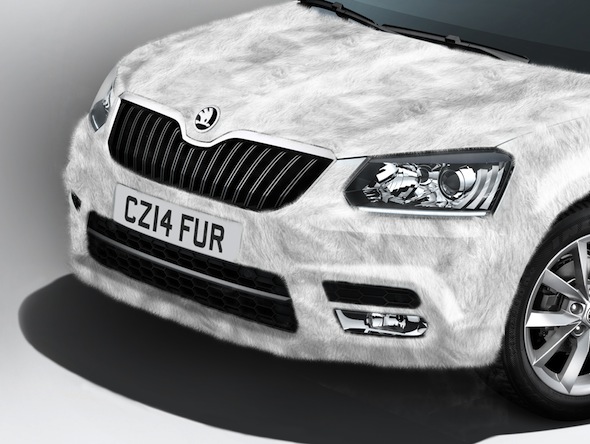 From July 2014 production onwards, brand new Audio Sonic technology will be a standard feature across the entire Peugeot range. This state-of-the-art new technology allows customers to personalise their car horns to reflect their taste and character.

Customers will be able to choose from an extensive library of sounds created at Peugeot's new Audio Sonic Personalisation Centre. This library will be constantly updated in line with current trends in music, culture and lifestyle.

For even more self-expression, customers can create and upload their own sounds, so that everyone can enjoy a truly individual horn, which they can change whenever they desire, just like changing a mobile ringtone.

The UK's road environments will lead the world sonically, offering a rainbow of sounds and audio experiences that will be envied the world over.

"Birdsong or Bach, Jazz Trumpet or Dubstep, the only limit will be our customers' imaginations" commented Orvil Pondaiss, Peugeot's New Head of Audio Sonic Personalisation, who tested the technology using sounds including his own four-year-old son laughing.

"We're delighted that our customers will be able to take personalisation to the next level with our new feature. We'll be offering guidance on how to create a distinctive horn that will get a positive reaction from fellow drivers. Hopefully thousands of Peugeot customers will be looking forward to getting their own horn later this year".

Enhancing the company's sustainability credentials, MINI's scientists, engineers and product designers have unveiled the new Mini Cooper T – the world's first vehicle to be powered by a tea-leaf biofuel composite.

This revolutionary new model, which is available in a variety of colours including 'Chamomile Yellow', 'Red Bush' and 'Earl Grey', is expected to cause a real stir in the motor industry when it's served up later this month.

Capable of covering up to 40 miles on a single cup, Cooper T certainly isn't what you'd call thirsty. It boasts all the standard features you would expect, such as VVT, ABS and DSC, but also benefits from DAT or Dunk Avoidance Technology. This ingenious filtration system stops peckish owners and opportunistic passersby from inserting biscuits into the Mini T's fuel tank in order to moisten their snacks.

Head of Cooper T engineering, Dr. Ivana Kuppa, said, "This particular project has been brewing for years. Our extensive research has shown that the nation's favourite drink is also an ideal biofuel. We already know good things come in small packages, but with Cooper T customers benefitting from up to 40 miles per cup, we are delighted to have the opportunity to bring this car to market."

Mini customers in the Gloucestershire area can get a first taste of the Cooper T at Mini Cotswold Gloucester on 1 April, where the vehicle will be displayed. 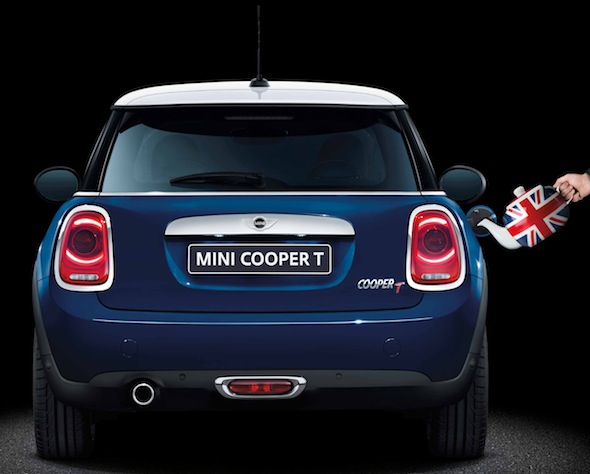 Making its debut ahead of the 2014/15 season, Citroën will produce a special Arsenal edition of the forthcoming C4 Cactus.

Limited to just 11 models and kitted out in the red, blue and gold shades of the Gunners' iconic crest, the C4 Cactus Arsenal showcases new technology to help the Club's most dedicated supporters follow their beloved team in comfort and style.

The integrated dashboard console will feature Citroën's new Geo Organised Away-day Location, Information & Entertainment interface, or G.O.A.L.I.E. The touchscreen system is preloaded with all of Arsenal's away fixtures, including directions to the matches, a database of pie and mash vendors and a music playlist of rousing football anthems to sing along to.

Head of Citroën UK's Special Projects division, Joseph King commented; 'We think Mr Wenger and the team will be delighted with this new special edition. As Official Automotive Partner to Arsenal, Citroën is always looking for new ways of celebrating our relationship. With the new fan-focused in-car technology, we think this model is pitch-perfect for the dedicated Arsenal supporter.'

The C4 Cactus Arsenal will be available to order from all Citroën showrooms later this year.* 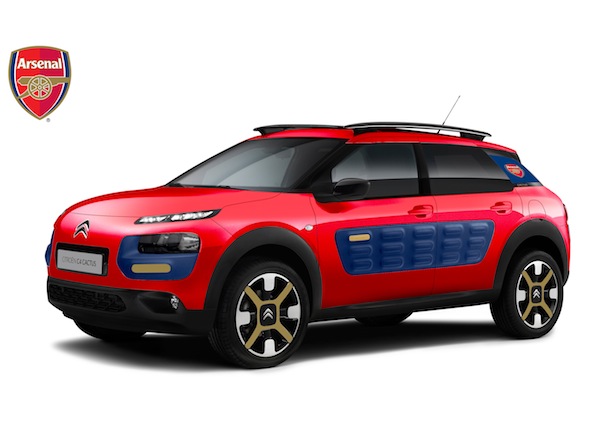 BMW looks set to change the face of motoring with the introduction of a patented artificial G-force technology.

BMW's new Force Injection Booster simulates the effects of spirited driving, even when commuting at slower speeds, to create a thrilling ride. When activated at speeds under 20mph, the Force Injection Booster (FIB) works by extracting kinetic energy from the car's engine and converting it into positive g-forces. These are then channelled directly at the driver and passengers through the air conditioning vents, while a mild electric current is delivered through the front seats, to simulate the same exhilarating feeling of driving at high speed*.

This technology comes complete with the BMW AirNet®, the latest in hair protection technology, to ensure that occupant's don't have to compromise between personal style and driving performance.

The Force Injection Booster will be available across the BMW range from 1 April, 2014. For more information on this optional feature please call 0800 093 6161 or email mika.notbetru@bmw.com.

*Face alteration is not permanent 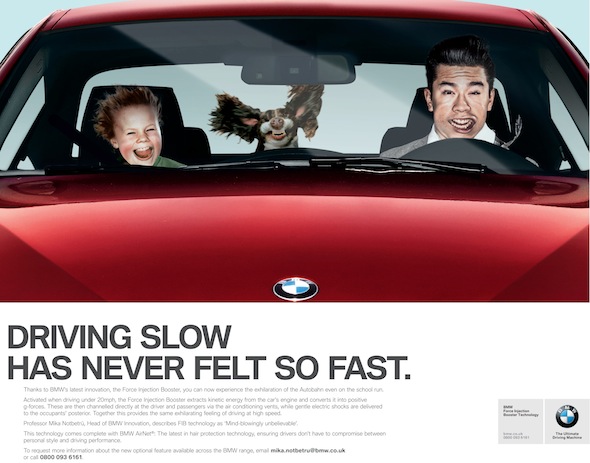 Intelligent dog completes its bedtime routine as instructed by owner