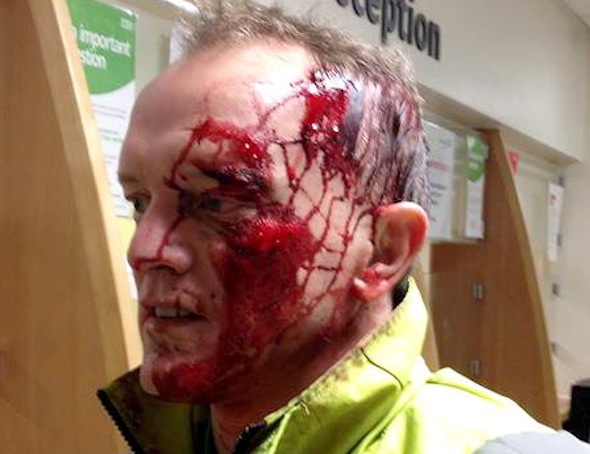 Richard Gummery, 45, from Much Dewchurch, Herefordshire, was cycling to work in the early hours of the morning when he was thrown from his bicycle by an unseen pothole.
The father-of-one, who cycles 70-miles a week, was pedalling at around 30mph in the bleak morning light when he was catapulted from his bicycle after his front wheel hit an enormous pothole.

Mr Gummery was rushed to Hereford County Hospital where he snapped the shocking images seen above before being treated for a deep gash to his head and a shattered elbow.

He required an emergency operation to fix his arm and spent two nights in hospital under surveillance before being discharged with a full-length cast.

Mr Gummery has since blamed his local council for not doing enough to repair the poor state of the roads in his area.

He told the Mail Online: "You often have people like me who work early hours and when you cannot see the potholes it becomes particularly difficult.

"The main roads are okay, but the side roads are appalling. Tidying up the roads must be one of Herefordshire Council's top priorities.

"I've been cycling for 20 years and on the side roads it has definitely got worse. Once they are there and reported, they should be filled in.

"People pay their council taxes and all you ask is they collect the bins on time and keep the roads tidy.

"But it has obviously not been happening."

Mr Gummery revealed that he has cycled the seven-and-a-half mile trip to work for the last 20 years and has never experienced a serious accident. He also said that he always took precautions by using lights and a high-visibility jacket.

He added: "'I cycle every day to work at Boots and normally I go straight down and stick to the A and B roads.

"But I decided to go down Knocker Hill Lane which is a country road and was going downhill so probably going at 30mph when I hit the pothole.

"I didn't quite go over the handlebars but went down and made sure my body took the impact.

"I landed on my elbow, which ended up broken and also had lots of grazes on the side of my face.

"I shattered a bone in my elbow which required a plate and screws and was operated on the next day.

"It's not too painful now but there's a huge cast on it and it's restrictive but hopefully I'll be more mobile in a few weeks time."

According to the Mail Online, transport secretary Patrick McLoughlin confirmed this week that Herefordshire Council will get £3,538,803 for road repairs.
Tags
Read Full Story Click here to comment