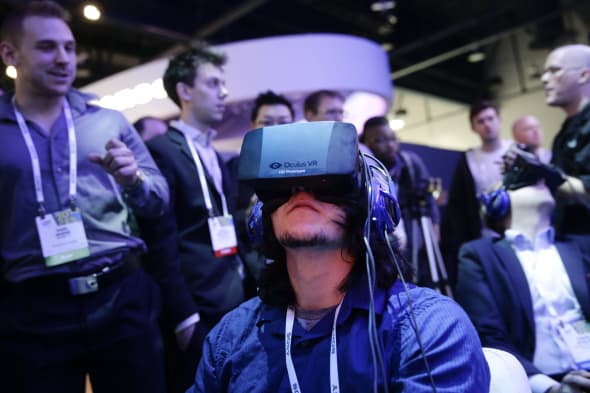 Facebook has snapped up fantasy world goggles maker Oculus VR for a cool $2bn. The deal is significant not just because of the bazillion numbers involved but the longer term strategic direction: Facebook is betting big money on fantasy gaming. Google, on the other hand, is focusing on information-driven specs.

Interesting because much of the technology behind Oculus could power future computing platforms, both for mobile 'phones and personal computing generally. Oculus impressed many recently with its virtual tech Oculus Rift headset (other companies like Sony are also muscling into the virtual-reality arena with Project Morpheus).

Mark Zuckerberg can barely contain himself: "When you put it on [the Oculus Rift]," he said writing on his FB page, "you enter a completely immersive computer-generated environment, like a game or a movie scene or a place far away."

"The incredible thing about the technology is that you feel like you're actually present in another place with other people. People who try it say it's different from anything they've ever experienced in their lives."

One 90-year-old grandmother appears to agree ("It's so real...oh Lordy"). But the goggles themselves - the first time FB is getting into hardware - are butt-ugly: a large dark block attached to the head via a thick strap. On aesthetics alone, Google's far more elegant Glass wins hands down.

Glass is a more heads-up device; Oculus appears much more immersive. But has FB out-maneouvred Google? It's not clear yet.

Techcrunch says "it's much more likely that these are bets made in advance to set the purchasing companies up for a game on a board that isn't yet clearly defined, and that won't take shape for at least another few years."

The $2bn paid for Oculus is a comparatively small spend in comparison with the $16bn FB paid for WhatsApp recently. Not everyone though is impressed with FB's Oculus Rift buy, as BusinessWeek's Brad Stone discovers.
Tags
Read Full Story Click here to comment