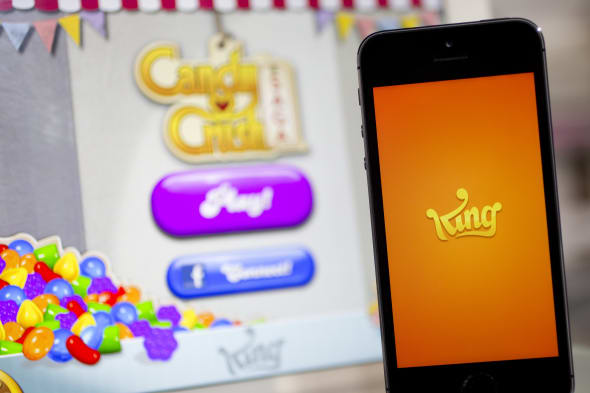 %VIRTUAL-SkimlinksPromo%The makers of mobile game Candy Crush Saga, including an investor from the Midlands, could make more than £4 billion when the company floats on the US stock market today.

King.com, the development studio behind the popular game, has been valued at £4.2 billion, and includes a British entrepreneur among its directors.
Melvyn Morris, a former board member at Derby County Football Club, could earn more than £500 million from his shares in the company when it floats on the New York Stock Exchange.

The self-made millionaire left school at 16 and became a management consultant at 20. After working in the United States he returned to the UK where he set up a range of businesses including a flooring company, before founding dating agency uDate. This took off as part of the dotcom boom and was sold for £150 million in 2002.

He used the money he made to help found King, as well as invest in his local football team, Derby County.

His 12.2% stake in King is estimated to make him more than £500 million when the launch takes place.
King's IPO (initial public offering) share price is 22.50 dollars, which industry experts say is in the middle of its expected range. The flotation will be the biggest by a UK firm in the technology boom, and follows Facebook and Twitter floating on the stock market over the last year. Twitter is now worth 30 billion dollars (£18 billion).

Candy Crush Saga is free to download but uses the "freemium" model where users pay extra for more moves to improve their score. Having started out on social network Facebook, it moved on to mobile devices in 2012, and is now played more than a billion times a day, according to the company.

Players have to match different coloured sweets in a set number of moves to complete increasingly difficult levels.

Jack Parsons, deputy editor at Bournemouth-based Apps Magazine, admires the structure Candy Crush Saga has built, but says the developer will have to expand its portfolio to maintain interest.

"The 'freemium' model has proven highly controversial among parents, but there is no denying it works - Appdata estimates Candy Crush Saga in-app purchases equal £610,000 per day worldwide.
However, a question still hangs over whether it works as a long-term strategy," he said.

"Despite King's successful valuation, there are still concerns about its over-reliance on Candy Crush Saga, despite launching other titles, including Farm Heroes Saga, which is currently being advertised on TV.

"King has estimated the average lifespan of a paying player on a particular game is two to nine months, so time will tell whether King can keep the public's attention or go the way of Zynga, which lost 40% of its value after entering the market in December 2011, but to date reportedly has lost 63% of its monthly and daily active users in 18 months, not to mention 68% of its paying customers."

An industry analyst also believes that while the IPO is impressive, and King is likely to enjoy some market success, there are pressures on the company.

IHS mobile analyst Jack Kent said: "For now, Candy Crush Saga's success has elevated King into the top rank of mobile games publishers - a position it maintained through 2013 and into 2014, but Candy Crush Saga will not remain a permanent cash cow and King must prove it can repeat this success with new titles.

"Building a series of titles that dominate global mobile games revenues is something we have yet to see in the mobile games business. King claims to have developed technology and a structure that will help it find repeat success, and it has a longer track record of developing popular games across platforms than many competitors, but there are no guarantees it can repeat its Candy Crush success."

The Monaco-based billionaire is said to be worth more than £4.2bn, with Topshop and Topman among the country's most successful brands. His first job, aged 12, was working for a shoe importer. He set up his first business at 15 with a £20,000 loan, on-selling imported jeans from the Far East to London-based retailers.

Branson's first successful business venture came in 1976 when he set up Student magazine aged just 16. In 1970, he founded a mail-order record retailer and within a year had opened his first shop on London's Oxford Street – Virgin Records. His fortune is estimated at £3.085 billion, according to the Sunday Times rich list.

The inventor gave his name to the household vacuum cleaner that would make him a fortune of £1.45 billion. James Dyson first reinvented the vacuum cleaner with the launch of his dual cyclone bagless 'G-Force' cleaner in 1983, followed more recently by the hand dryer and the fan. In 1997, Dyson was awarded the Prince Phillip Designers Prize, and elected a Fellow of The Royal Academy of Engineering in 2005.

Founder of Specsavers, Bristol-born Dame Mary Perkins is Britain's first female self-made billionaire, reportedly worth £1.15 billion. The 67-year-old and her husband Douglas, 68, founded the eye-care company in 1984 and they can now boast more than 900 stores across Britain. Perkins was made a Dame Commander of the Order of the British Empire in 2007 as recognition for her work.

Recently retired Beckham is the highest earner in British sport, according to the Sunday Times Sport Rich List. 'Brand Beckham' that has seen the 38-year-old amass a fortune of £165 million from endorsement deals and salary payments from his company, Footwork Productions, over the last decade. But Beckham is still some way off the richest sportsman in the world - golfer Tiger Woods, who is worth a staggering £570m.

Yorkshire Tory peer Lord Kirkham entered the billionaire league in 2010 when he sold his furniture company, DFS, for a reported £500m. In 41 years, Kirkham grew the brand, which started on the outskirts of Doncaster, to 79 stores, three factories and more than 2,600 staff. He received a Knighthood in 1995, a Peerage in 1999 and a CVO in 2005. He now owns a large share in Iceland supermarkets and is worth a reported £1.1billion.

The former Beatle takes the top spot in the Sunday Times Rich List of musical millionaires, sharing a £680 million fortune with his wife Nancy Shevell. McCartney has topped the list of wealthy musicians every year since it was formed 1989 when his fortune was estimated at £80 million.

Author of the hugely successful Harry Potter series, Joanne Kathleen Rowling, has a net worth of £560 million – making her the world's richest author. Rowling wrote the first Potter books on a manual typewriter while a single mother living on benefits. The manuscript for the first Harry Potter novel was rejected by 12 publishers and when finally accepted, Rowling received an advance of just £1,500. Harry Potter is the highest-grossing film series of all-time and the brand has been estimated to be worth as much as £10 billion.

East-ender Lord Sugar, best known for his no-nonsense judging on BBC1s The Apprentice, started his career at 16, selling car aerials and electrical goods out of a van he had bought with savings of £50. In 1968 at the age of 21, Sugar started home electronics company, Amstrad (short for Alan Michael Sugar Trading). By the age of 40 he was worth about £600m. Sir Alan sold Amstrad in 2007, and is now worth a reported £770m, with much of his wealth coming from his extensive property empire.