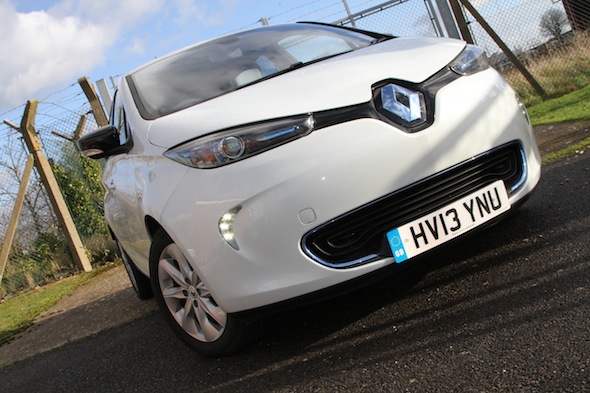 With the charging problem now sorted (traced to a faulty earth on the charger and nothing to do with the car), we've now been able to put a few miles under Zoe's belt. So, has my view on the car changed?

Well, not really. As a car, the Zoe is not a bad little hatch. Certainly, it's one of the more attractive offerings Renault has given us in a while. I've been stopped countless times in car parks by people asking what it is. Interestingly, very few realised it was electric and were just interested in its looks.
This reflects the fact that Renault considers this a niche model, and that it's had far less press than Nissan's Leaf, which is a shame because it's an equally capable car, arguably a little better given its range. It drives like a regular car, albeit with a little extra weight, and has everything any other hatch has. It's enjoyable to drive, and easy too.

However, the recent dark, cold and wet weeks have put additional pressure on the Zoe. I've taken to driving in a warm jacket, with just the barest of heating on, to keep the screens demisted, which reminds me of a 1980s Beetle I used to own.

The fact that I've been driving pretty much everywhere with the lights and wipers on too hasn't helped battery life. This, combined with the cold weather, has limited the range on full charge to 80 miles (Renault claims up to 120). I'm hoping as the days improve so will the range, allowing my stress levels to drop on the way home too!

A couple of other niggles . . . The heater timer doesn't seem to work. The car offers the facility to turn on the heating while still plugged in, which saves warming the car on the battery, but I just can't seem to get this to work.

I also noticed a very strange issue. I've been resetting the trip meter every morning to help me work out how many miles I've covered and how many I have left. When I arrive home this is normally around 79.6 miles, but following an overnight charge this reads 179.6 – very weird!

The real problems still come down to the support structure. Range anxiety is a daily issue, and while I'm clearly not a member of Renault's target audience because of the fact that I do an 80-mile commute, an electric car does need far more forward planning than we've become used to, and this is where the problem lies.

The infrastructure and ease of use when it comes to normal internal combustion-engined cars means we rarely need to worry about planning our day-to-day trips in detail. Even in the middle of the New Forest, the local petrol station is less than five miles away and there's a 24-hour petrol station within 10 miles. So, unexpected trips are not a problem. Low on fuel? Pop to the garage.

With the Zoe, this just isn't possible. If I know I'm going out in the evening then I'm afraid the Zoe is relegated to the car park in favour of anything else.

Renault and the other manufacturers recognise this and are working on improving the charging network. More rapid chargers will make it easier to travel long distances, but at present I find I use the Zoe as a second car and I think this is the point. In that role, the Zoe is perfect – for local trips and small commutes it's a great idea. But over the past few weeks I simply couldn't have done without a normal car as well.