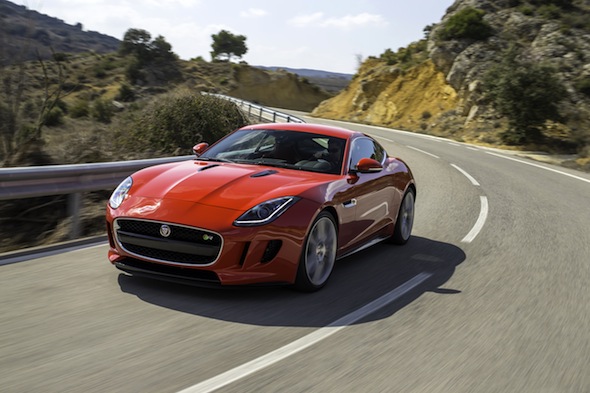 This is the car we've been praying Jaguar would build since they revealed the stunning C-X16 concept two years ago. And Jaguar has acted upon those wishes. The F-Type Coupe is a near identical replica of that concept car and aims to take the British brand into the big time. AOL Cars went to Spain to try it out.
What is it?

It's the car life-long Jaguar enthusiasts have been waiting for since 1971. While there has been the XJS and two versions of the XK to wet their appetites, there hasn't been a proper replacement for the E-Type fixed head coupe for more than 40 years. And here it is – the new Jaguar F-Type Coupe, a car the British marque says is its definitive sports car and one that has recently lapped the fearsome Nurburgring quicker than the Jaguar XJ220 supercar of the 1990s. Not only is it considerably more practical, but the F-Type Coupe debuts a raft of new technology compared to its convertible sibling that was launched last year – equipment such as a second-generation version of Jaguar's electronic active differential, a torque vectoring braking system, sports suspension with adaptive dampers and optional carbon ceramic brakes. The Coupe is a far more focused sports car than the Convertible too; the addition of the roof has made the all-aluminum two-seater a stiffer and more hardcore offering. And as a consequence, the F-Type Coupe comes in R specification – a full-fat and throaty range topper.

Let's start with that F-Type R. It uses an engine we're all very familiar with – namely Jag's 5.0-litre supercharged V8 with 543bhp. It gargles and crackles its way to 60mph in a hugely impressive four seconds while its top speed is capped at 186mph. Universally acknowledged as the sweet spot of the Convertible line-up, the V6S also appears in Coupe guise. Its howling 3.0-litre supercharged V6 throws out 375bhp and gets to 60mph in 4.8 seconds before topping out at 171mph. Meanwhile, the entry level F-Type Coupe has to make do with 'just' 335bhp, a 0-60mph time of 5.1 seconds and a top speed of 161mph from its 3.0-litre supercharged V6.

Each model has decent levels of equipment. The F-Type Coupe kick starts the range at £51,235 and comes as standard with goodies like switchable driving modes, twin sports exhausts, sports suspension, 18-inch alloys, leather and suede seats and a leather steering wheel. For £9k more the V6S comes with high performance brakes, an 'active sports exhaust', a limited slip diff and 19-inch wheels. Meanwhile the predicted best-seller in the UK, the R, sits at £85k. It goes up against the big boys of the sports car world and as such comes dripping with gear like Jaguar's Adaptive Dynamics System (it adjusts damper rates up to 500 times a second to optimise stability), an electronic differential, torque vectoring braking system (it brakes individual wheels during cornering helping to eliminate understeer and oversteer), uprated brakes, a unique bodykit, quad exhaust pipes, 20-inch alloys, racier seats, leather dashboard and a flat-bottomed steering wheel. There's a rather large options list as well, with highlights being the carbon ceramic brake system at £7k – cheap compared to the prices Ferrari and Porsche charge.

Take your pick. F-Type and F-Type S models can count cars like the cheaper Cayman S and Audi TT-S as rivals while the hairy-chested F-Type R goes up against machinery such as the Porsche 911, the mid-engined Audi R8 and that other British contender – the Aston Martin V8 Vantage.

It's the best Jaguar we've ever driven. The British marque has worked hard on making the F-Type Coupe do exactly what the driver wants. The steering system is immensely direct allowing you to place the car exactly where you want it, the eight-speed auto 'box is slick and the ride strikes a good balance between being sporty and comfortable. It's all backed up by a wonderful soundtrack (it's a more mellifluous tone in the V6S compared the R's V8 cackle) and a beautifully appointed interior. And the Coupe is a far more planted machine than its drop-top sister. A slight complaint of the roadster was that it was a bit too soft for a Porsche Boxster S rival, but the Coupe version rectifies this. The R adds a whole other layer of driving pleasure too – immensely powerful and grippy, it's a supercar in a sports jacket. On Aragon's Motorland race track in Spain, the R was a snarling brute with a heavy kick. But on the road, it transformed into a gentile V8 grand tourer. Our pick would be the V6S, though – it does everything you'd want from a two-seater, sounds a good deal more wonderous and is a sizeable £15k cheaper than the R.

Jaguar has done the impossible – they've produced a proper successor to the E-Type. The icon's shadow has hung high over the Coventry-based company for four decades now, but finally a credible descendant has been born. It's not all show though, for the F-Type Jag Coupe is a mightily good car. It spins a different yarn compared to its nearest competition but, to be entirely honest, is all the better for it. The Coupe is the centerpiece in the company's aim to transform the brand into a statement of British chic that convincingly rivals anything Germany can offer. It's one hell of a good car – congratulations Jaguar.