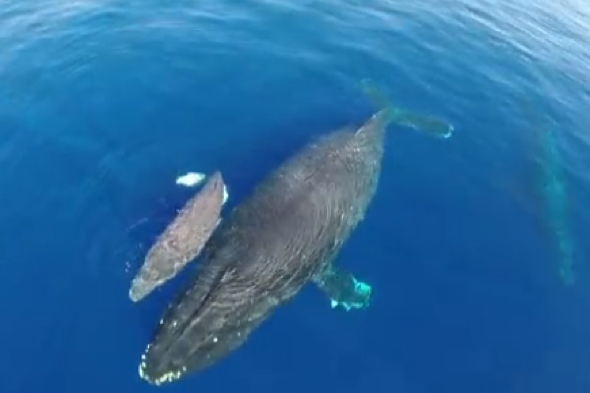 Drone footage has captured some breathtaking footage of stampeding dolphins and a baby humpback whale.

Captain Dave Anderson of Capt Dave's Dolphin and Whale Safari in Dana Point, California, recently filmed a five-minute video with a drone of a huge mega-pod of thousands of common dolphins stampeding off Dana Point, three gray whales migrating together down the coast off San Clemente, California, and heartwarming close-ups hovering over a newborn humpback whale calf snuggling with its mum as an escort whale stands guard nearby, in Maui.

According to the information uploaded by Dolphin Safari with the video on YouTube, Southern California has the greatest density of dolphins in the world. It has pods up to 10,000 strong "stretched out for miles like the wildebeests of Africa". There are over 400,000 common dolphin alone, and it's also home to the largest concentration of blue whales on earth.

Capt Dave wrote: "This is the most beautiful and compelling five minute video I have ever put together. I learned so much about these whales and dolphins from this drone footage that it feels like I have entered a new dimension!

"I have not been this excited about a new technology since we built our underwater viewing pods on our whale watching boat. Drones are going to change how we view the animal world."

He filmed off a small inflatable boat, launching and catching the quadcopter drone by hand, risking injury from the four propeller blades or loss of the drone.

He actually lost one drone in January on takeoff when it nicked his small VHF radio antenna on the 14-foot rigid inflatable he was filming from and it went into the water.

Alone, six miles offshore, Capt Dave jumped into the cold waters off Dana Point to retrieve the footage he'd taken on a flight a half hour earlier that morning.

He said: "I had my hat and glasses on, I was fully clothed with long-johns on to keep warm and my cell phone and wallet in my pocket. It was a stupid move, but the copter started sinking so fast it was my only hope to get the amazing footage I had just shot.

"I get so nervous every flight over the water now, after the accident, my hands start shaking. My wife says no more drones if I lose this one. But she said that before I lost the other one. Now that she's seen what it can do, I think she's just as hooked as I am."

He added: "This technology, that offers such steady footage from the air for such a low price and is so easy to fly, is new. This was a ten or twenty thousand dollar copter a few years ago and flying those took a great deal of skill.

"I can't wait to see what footage this year will bring with this drone, getting a different perspective on the amazing sightings we already have off Dana Point.

"There is debate in many states right now about making use of these drones illegal. People are justifiably concerned about invasion of privacy. But it would be a shame to have this new window into a whale's world taken away."