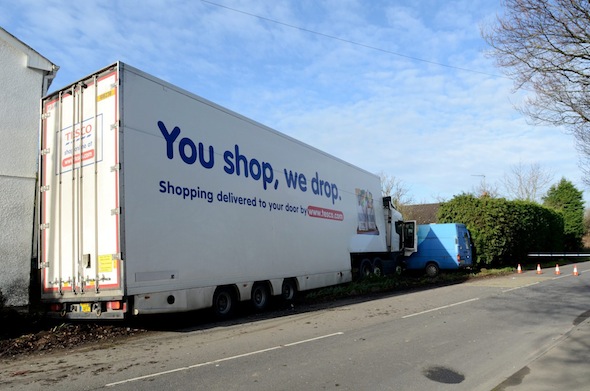 A HGV operated by the Tesco supermarket chain has left a trail of destruction after careering off the road.> The runaway lorry laid waste to everything in its path, crushing five vehicles and crashing into a house.

Luckily, no one was injured in the early morning collision, which occurred in a quiet residential area of the Devon town of Heathfield.

Currently it is unknown what caused the driver to lose control of the articulated lorry, but it is thought he was only a few hundred yards from his depot when he crashed.

The huge truck smashed into a smaller flatbed lorry, before hitting a bungalow and four other vehicles, including a convertible MG sports car that was completely destroyed.

A young woman who was asleep inside the now devastated house, escaped unharmed but had been left 'in shock', reported the Daily Mail. 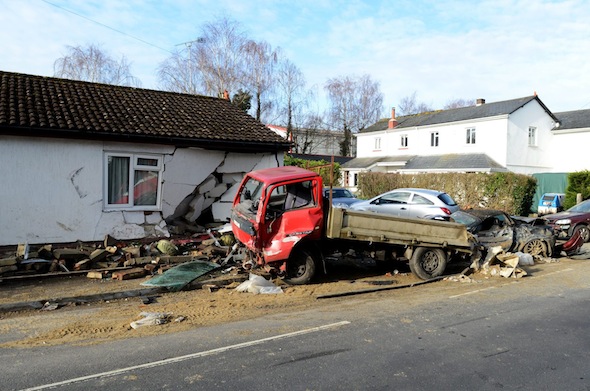 Fiona Davies, who lives at a cottage nearby, told the newspaper: "I heard the sound of metal scraping and rubbing and then a loud vibrating noise which turned out to be the cooler from the refrigerator in the back if the lorry.

"Fortunately nobody was hurt but I've got a new shed and a tree in my garden."

Fire incident commander Gary Martin, who was amongst the first to attend the scene, described it as "absolute carnage".

"When we arrived the ambulance and police were already there," he told the Daily Mail.

"We liaised with paramedics who were treating the lorry driver for shock.

"It is very, very fortunate that no one was injured when you consider how badly damaged the cars were."

The road was closed for much of Saturday while emergency services cleared the wreckages.

Tesco has since issued a statement, in which the offered assistance with the police in their inquires into the incident.
Tags
Read Full Story Click here to comment