Get your Rocks off: Chunky Vauxhall Adam due for Geneva unveiling 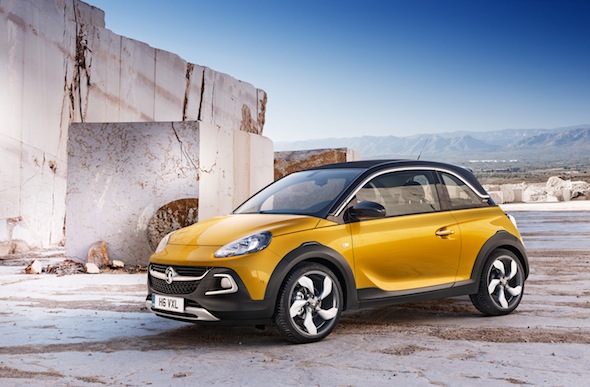 Just when you thought the marketing bods at Vauxhall had run out of ideas for the column-inch-hunting Adam, they go and pull the 'soft-roader' card.
The Vauxhall Adam Rocks (as in it rocks and can drive on rocks... sort of) is set for a big Geneva unveiling and it will 'wow' crowds with its raised ride height, wider stance and chunky body addenda.

According to Vauxhall, the new model is inspired by "agile parkour athletes" (so not the lumbering ones, then) because they "move from one place to another, negotiating urban obstacles in between."

That means the dampers, springs, rear suspension geometry and steering have been fettled to cope with rougher terrain and Vauxhall has whacked on some 'anthracite-coloured cladding' to make it look a little tougher.

The marketing department has also wheeled out the Big Book of Puns again as new paint colours, including the vibrant yellow 'Goldbusters', will be available from launch.

Another first on the Adam Rocks is a folding canvas roof that peels back to give the occupants a sense of open-top fun. The roof is electrically operated via a switch on the dashboard and can be folded back in just five seconds.

The Rocks model will also be the first to sport Vauxhall's new 1.0-litre Ecotec direct-injection, three-cylinder engine that produces around 113bhp. Vauxhall is yet to release any official economy figures.

"Adam Rocks combines the toughness of a crossover with the coolness of open air driving," said Stuart Harris, Vauxhall's Head of Carline Brand.

"It's the perfect Adam for active drivers wanting to stand out from the crowd."

Customers will be able to make their own minds up towards the end of the summer when production begins in Germany.

Get your Rocks off: Chunky Vauxhall Adam due for Geneva unveiling
Up Next