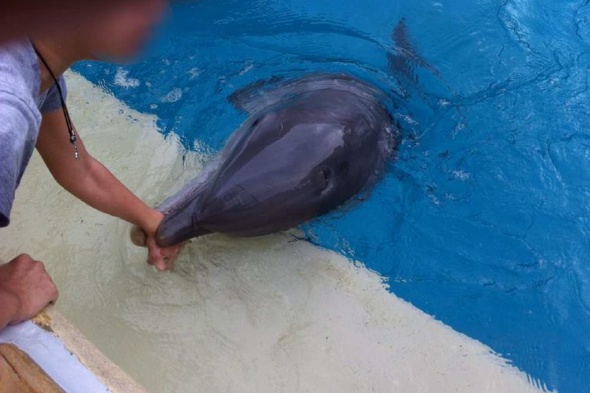 A nine-year-old girl was this week bitten by a dolphin on a trip to SeaWorld, says People for Ethical Treatment of Animals (Peta).

The animal rights group asked the US Department of Agriculture to investigate a report of a dolphin biting the girl at SeaWorld in Texas.

In its request, Peta said the girl was bitten on 22 February while she was trying to pet the animal at SeaWorld's Dolphin Cove exhibit, which allows visitors to touch the dolphins.

According to the Daily Mail, Peta counsel Brittany Peet said in the request: "This incident and exhibit clearly endangered both the dolphin and the public," adding it was "an apparent Animal Welfare Act violation."

General counsel to Peta Jeff Kerr said: "It's stressful enough for far-ranging dolphins to be locked up in SeaWorld's tiny tanks, but forcing them to interact with visitors is downright dangerous.

"SeaWorld's 'Dolphin Cove' is another example of how the park's main priority is profit, not the welfare of the animals or the safety of its guests."

According to ABC News, the dolphin grabbed the girl's hand so tightly that park staff had to force it to let go, and the girl had bite marks and swelling to her hand.

SeaWorld San Antonio spokesman Brian Carter told ABC News that they have not received any word from USDA on the incident. He added: "We [SeaWorld] are fully investigating this incident and we regret the guest experienced this during her visit. SeaWorld provides thousands of safe interactions between our guests and animals each day, and incidents like this are few and far between."

The Whale and Dolphin Conservation (WDC) posted its open letter to the Virgin boss online, and the video has become something of a hit.

The song goes: 'Hey Sir Richard, we dig your hair, your spaceship rides and your business flair.

"Don't make a whale pay so you can make some profit off your Virgin Holiday.

"Selling package trips to SeaWorld sucks, do you really need the cruelty bucks? You're an ocean elder, you should know better, so we're sending you this open letter. We like you Richard, you're smart and quick, so do the right thing Sir and don't be a d**k."

Branson's face is super-imposed over a man's body while he dances to the tune, rides a whale and streaks down a busy street.

The video was uploaded to YouTube, with a caption: "Richard Branson claims to care about whales but Virgin Holidays sells tickets to SeaWorld. Keeping orcas in tanks for 'entertainment' is NOT conservation. It's NOT education. It IS cruel and it has to stop.

See the open letter/video below: