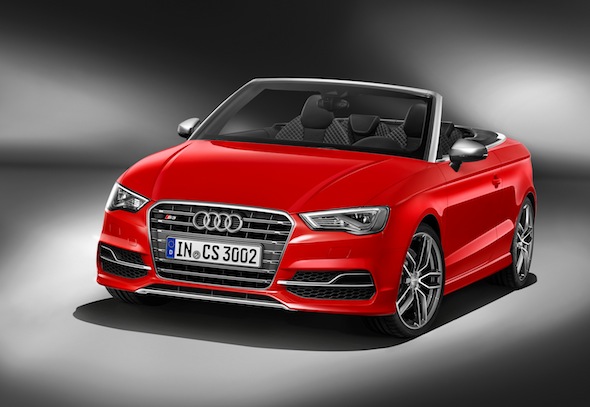 Audi has released the first details of its new performance convertible, the S3 Cabriolet.
Based on the popular A3 Cabriolet, the S3 is due to be officially unveiled at next month's Geneva Motor Show, and joins an S3 range that includes a three-door hatchback, four-door saloon, and five-door 'Sportback'.

It has the same 2.0-litre turbocharged engine as its fixed-roof S3 siblings, which produces 296bhp – some 119bhp more than the most powerful A3 cabriolet in the current range.

As with all fast Audis, the S3 Cabriolet is a Quattro model, meaning power is sent to all four wheels, via a six-speed twin-clutch automatic gearbox, which is fitted as standard.

The car's claimed performance figures are astonishing, for what is essentially a heavy, four-seat drop-top. The 0-62mph sprint takes just 5.4 seconds and the top speed is electronically limited to 155mph.

Fuel consumption and CO2 emissions figures are also impressive, at a combined 39.8mpg and 165g/km respectively.

To visually differentiate the S3 iterant from the rest of the A3 Cabriolet range, it gets grey front grille detailing, more aggressive bumpers and a metallic windscreen surround and mirror housings. The car sits as standard on 18-inch five-spoke alloy wheels, with 19-inch items available as an option.

Prices for the new S3 Cabriolet have yet to be confirmed, but will be announced before April when UK order books open. The first customer cars are expected for delivery in July.

Audi S3 Cabriolet set for Geneva debut
Up Next