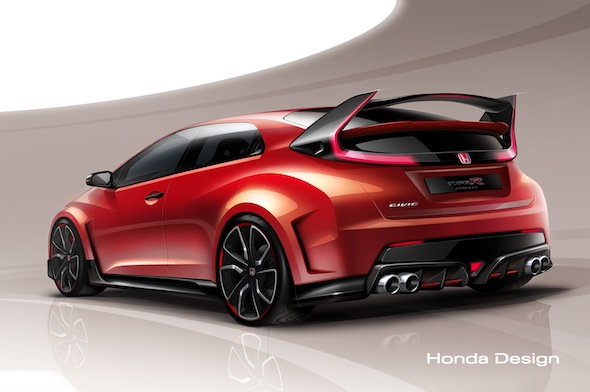 Civic Type R fans mourned the loss of their beloved hot hatchback in 2011 when strict European emissions legislation ruled that the high-revving 2.0-litre VTEC engine wasn't clean enough for the UK market.
Good news is on the horizon for Type R devotees as Honda has just released official sketches of its Type R concept vehicle that's due to be unveiled in the flesh at the Geneva motor show next month - a concept that could heavily-influence a road-going version.

Text accompanying the sketch described the muscular model as a "racing car for the road" – a statement that is qualified by the Type R concept's outrageous rear wing, aggressive quad tail pipes and deep cooling vents that sit behind the wheel arches.

Sources close to the Japanese marque have revealed that a brand new 2.0-litre turbocharged petrol engine - that is slated to produce in the region of 270bhp - will power the road going iterant. But this figure could creep past the 300bhp level should Honda's performance-obsessed engineers get their own way.

The introduction of a turbocharger will disappoint admirers of the screaming, naturally aspirated lump of old but it is the simplest way for Honda to adhere to European emissions rules while maintaining hair-raising performance.

Autocar Magazine drove a Type R engineering ptorotype last November, stating that the finished model had the potential to "be outstanding".

The automotive title was also sure that the finished product would get a six-speed manual 'box rather than following the trend for dual-clutch automatic gearboxes.