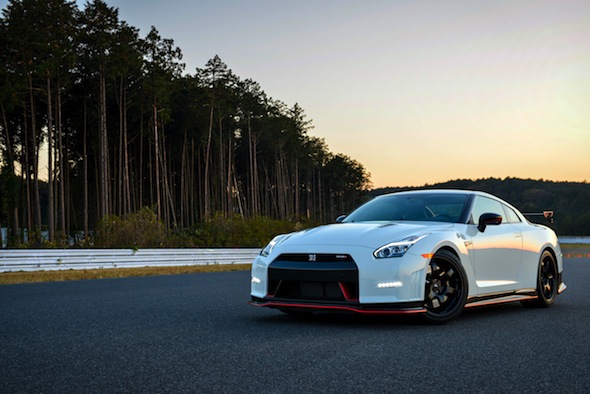 Nissan is to showcase its Nissan GT-R Nismo sports car at the Geneva motor show next month, marking its European public debut.
Already available in Japan and arriving in Nissan's European showrooms in September, the Nismo is a honed and fettled version of the already highly capable GT-R coupe.

Under the bonnet it is fitted with the same twin-turbocharged 3.8-litre V6 engine as the standard car, but power has risen to a staggering 592bhp thanks to new high-flow turbochargers – a figure which comfortably outguns Porsche's biggest conventional weapon, the 911 Turbo S.

However, with the GT-R the engine is only half the story. The already accomplished chassis has now been boosted with the fitment of custom-developed Bilstein suspension, unique tyres and new hollow rear anti-roll bar. The result is an astonishing Nurburgring Nordschleife time – the unofficial benchmark of performance cars – of 7:08.679.

"With a 7:08.679 lap time, we can authoritatively say that the Nissan GT-R Nismo holds the volume production car lap record at the Nürburgring Nordschleife, which is the gold standard of high performance achievement," said Nissan CEO Carlos Ghosn.

Costs for the Nissan GT-R Nismo have yet to be confirmed, but expect a price tag north of £100,000.

Nissan GT-R Nismo coming to Geneva
Up Next